Working on Labor Day to Recover from Harvey 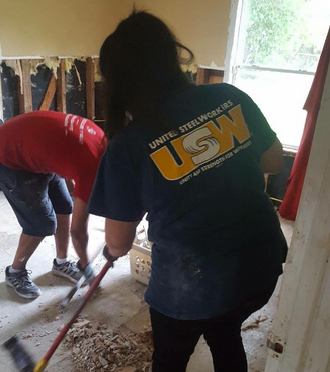 Working on Labor Day to Recover from Harvey

Watching helplessly as flood waters rose was not an option for Brandon Parker. This Texas refinery worker and member of the United Steelworkers (USW) union has a jacked-up Suburban and a friend with a boat. There was no way he was going to let family members, neighbors or strangers drown.

Like Brandon, many union members couldn’t sit still through the storm. One drove her high-riding pickup truck two hours to find baby formula for co-workers rescued from their roof with a newborn. Another used his pickup truck to rescue people whose cars got caught in fast-moving water.

These are among the many workers across Texas and across the United States whose sense of community drove them to respond to the crisis created by Hurricane Harvey.

Brandon’s most harrowing rescues occurred on Sunday, Aug. 27, when he joined the citizens armada, the flotilla of boats owned by civilians who drafted themselves to serve as first responders when the catastrophic size of the emergency overwhelmed professionals.

The crew on Brandon’s boat was all union. His longtime friend, Kenneth Yates, a member of Plumbers and Pipe Fitters Local 68 in Houston, owned the Bay Stealth craft. Yates’ stepfather, Robert Young, a retired member of the AFT, joined them on the expedition through engulfed Dickinson, Texas.

They launched the boat into deep water on Interstate 45. Bands of storm clouds pelted them with rain, paused, then resumed. The flood water was about six feet deep, not quite over the front door of most homes they passed. The current was strong, making it hard to maneuver the boat.

At one point, Brandon saw—just two inches below the water’s surface—an iron fence topped by arrow-shaped finials. He quickly shoved the boat away with an oar, preventing the metal points from puncturing the hull and sinking the craft. They were lucky. They saw rescue boats that were flipped over and one wrapped around a light pole. Ultimately, though, both the hull and propeller of Kenneth Yates’ boat were damaged from striking unseen underwater objects.

They picked up nine people. One family came from a second-story deck. They climbed down the deck’s steps and got into the boat. Another group was on the second story of an apartment building and descended its exterior staircase to the boat.

This was before evacuation was ordered, and Brandon was frightened for the people who chose to remain in their homes. He said he urged everyone he saw to leave while they could but many refused. “Because all the professional resources were being used, it might be hours before they could be rescued in an emergency,” Brandon told me last week.

When it got dark, Brandon, Kenneth and Robert went home. They didn’t have lights on the boat, so it wasn’t safe to continue.

Brandon wasn’t done though. That night, a family in his neighborhood needed to get out of their house after water had risen four feet inside. It was a young boy, a friend of Brandon’s 11-year-old son, and the boy’s uncle. Brandon drove as close as he could to the house, then got a guy in a boat to go in and bring them out to where the car was.

That is how Brandon started rescuing people—with his car, which would end up with damage to the steering system, differentials and wheel bearings from driving in high water. He first put his car into service Saturday night, Aug. 26. He was headed home from his brother-in-law’s house, where he’d watched boxer Floyd Mayweather defeat Conor McGregor. Rain was pouring down and lightning flashing. He saw people walking along the swamped road, drenched.

Some had lost their cars in the rising water. Some had parked, afraid to drive further. Brandon picked up about a dozen in his high-riding, 1990 Suburban and drove them to their homes, most to the neighborhood where his brother-in-law lived.

By Sunday, Aug. 27, the roof of Brandon’s house in League City, Texas, was leaking, and he and his wife and three children had taken in flooded out in-laws. Still, he told his wife that he wanted to go out and help people. “She wasn’t too happy, but she understood that I needed to do that,” Brandon recounted. “I have been in situations where people have helped me. Why wouldn’t I go and help other people?”

That morning, he drove to a neighborhood in hard-hit Dickinson, where nearly every house was flooded. He found hurricane refugees walking through deep water, carrying plastic garbage bags of belongings over their heads. This is dangerous because people can step in the wrong place and suddenly slip under water. That’s because there were deep ditches on both sides of the road and floods push manhole covers off.

He piled people into his Suburban and drove them to a bar that was still on dry ground. Other volunteers ferried them to shelters from there.

On Monday, Aug. 28, Brandon drove his truck through high water to get to a donation center in Galveston. He picked up cases of water, food, toiletries and other supplies. He distributed them in his neighborhood because many elderly residents had refused to leave their homes. “I went door to door giving out water and food. A lot of people turned me down. They said they didn’t want to take what others needed.”

The supplies were crucial because even when people with high vehicles like Brandon could get out, they found stores closed and gas stations out of fuel. Brandon continued checking on his neighbors and handing out provisions through Wednesday, when water started receding and he had to go to work at the LyondellBasell refinery in Houston.

Like Brandon, Felicia Weir of Santa Fe, Texas, is a USW refinery worker with a high-riding truck. Even after her home flooded, she drove for hours on Wednesday, backing up constantly to circumvent flood-closed roads, to get baby formula and clothes for a couple who had been plucked from their rooftop with an infant granddaughter and two other young grandkids.

Marcos Velez, a USW staff member from Pasadena, Texas, drove his pickup truck through flood waters to rescue a refinery worker whose car was inundated by three feet of fast-moving water in Baytown, Texas, as he tried to drive to his job before dawn. Then Velez turned around and, despite blinding rain, rescued another dozen people whose cars were bobbing in the fast-rising water in that same neighborhood.

Meanwhile, the Texas AFL-CIO set up a charitable organization, the Texas Workers Relief Fund to aid working families, and local unions from across the country began donating. The National Nurses United (NNU) Registered Nurse Response Network, an organization of volunteer unionized nurses, deployed its first unit to Houston on Thursday. Three Texas USW local unions handed out food and water to first responders and the public.

These efforts won’t stop with the rain. This Labor Day, workers from across the country will be volunteering. They’ll be helping survivors of Hurricane Harvey recover. And they’ll continue donating their services for months.