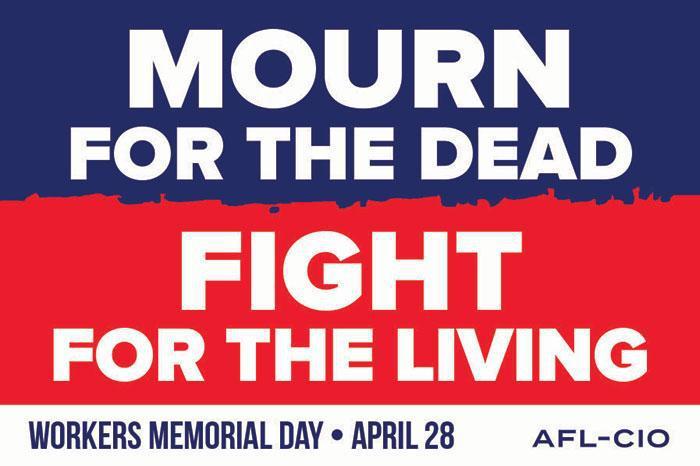 The voice of history, the subject I taught in a community college for two dozen years, could hardly be louder or clearer when it comes to unions and to worker safety and health laws.

We need them both.

In an ideal world, everybody would live by the Golden Rule, some form of which can be found in just about every religion. But we live in a real world where greed is the gospel of many employers.

If many bosses had their way, we wouldn’t have unions or worker safety and health laws. For a long time, we didn’t have either in the United States. Not until the 1930s did a Democratic-majority New Deal Congress pass legislation giving workers the right to bargain collectively and requiring their employers to recognize unions.

Not until 1970 did Congress create the Occupational Safety and Health Administration. The landmark bill passed with bipartisan support. Even Republican President Richard Nixon, who was less than labor-friendly, hailed the bill.

Hogs will fly and kids will stop shooting hoops in my native Kentucky before the current Republican president and his GOP-majority Congress would approve anything close to the Occupational Safety and Health Act that created OSHA.

OSHA was needed because many, if not most, state and local worker safety and health laws were inadequate or were not rigorously enforced.

Before strong unions and meaningful protection for worker safety and health, most workers toiled long hours at low pay in jobs that threatened—and often claimed—life and limb.

This month marked the 100th anniversary of United States’ entry into World War I, the bloodiest conflict in history to that point.

The war—called the Great War before World War II—started in 1914, when some 35,000 U.S. workers were killed in industrial accidents, according to historian Howard Zinn. That death toll equals two-thirds of all U.S. battle deaths in the war, which ended in November 1918.

A century ago, railroads, mines and factories were slaughterhouses. Many children were among the dead. Child labor was widespread in American industry. Adults were so poorly paid that boys and girls as young as 10 had to go to work to help their parents make ends meet.

Industrialists praised child labor as a godsend. They claimed work taught children responsibility and kept them off the streets and out of trouble. Also, mine and factory owners saw a practical side to child labor. They could pay children less than grown-ups.

Many industrialists bragged about how often they went to church. Some said God gave them their money. Christian “Captains of Industry” hated Charles Darwin’s scientific theory of evolution. But they loved Social Darwinism, a philosophy which claimed that business works like nature.

It was “survival of the fittest” in both, Social Darwinists said. There was nothing anybody could do—or should do—about it, they added. Hence, Social Darwinists argued that unions and worker safety and health laws should be opposed because they interfered with the “natural operation” of the “free market.” One Social Darwinist said such laws were a waste because they only protected “those of the lowest development.”

With Social Darwinism, millionaires didn’t have to worry about workers losing a leg, an arm, an eye or their lives on the job. Social Darwinists said workers were inferior beings; otherwise they would be millionaires. Besides, worker safety and health laws would cost the millionaire industrialists a few bucks.

Social Darwinist millionaires had friends in high places. The plutocrats bankrolled politicians to bust unions and to keep worker safety and health laws off the books or to ensure such laws were toothless.

Sound familiar? How many union-despising politicians enjoy the largess of rich reactionaries today?

Anyway, while employers and their puppet politicians are still fighting organized labor and government safety and health regulations, a lot of the media is still cheerleading for American business and industry.

Not so long ago, right-wing newspapers editorialists smeared unions as “un-American” and “communist.” They slammed union leaders as “labor bosses” and rank-and-filers as “union thugs.”

Since the demise of the “Evil Empire,” uber-conservative editorial writers and TV and radio bloviators mostly stop as “socialist.” But they still trot out “union bosses” and “union thugs.”

History teaches that employers, helped by their bought-and-paid for politicians and a sympathetic media, ensured that a strong union movement and something like OSHA would be a longtime coming. But come they both did.

Since 1989, unions have been observing April 28 as Workers Memorial Day because OSHA was born on April 28. OSHA did much to improve worker safety and health for all workers, not just union members.

But if the Tea Party-tilting reactionaries who run the GOP these days had their way, unions and OSHA would disappear. When Republicans extol “free enterprise,” they mean free of unions and free of laws that safeguard workers on the job.

When we pause this Workers Memorial Day to remember those who lost their lives on the job, let’s remember the words of one of the greatest union heroes from history—Mary Harris “Mother” Jones: “Mourn the dead; fight like hell for the living!”