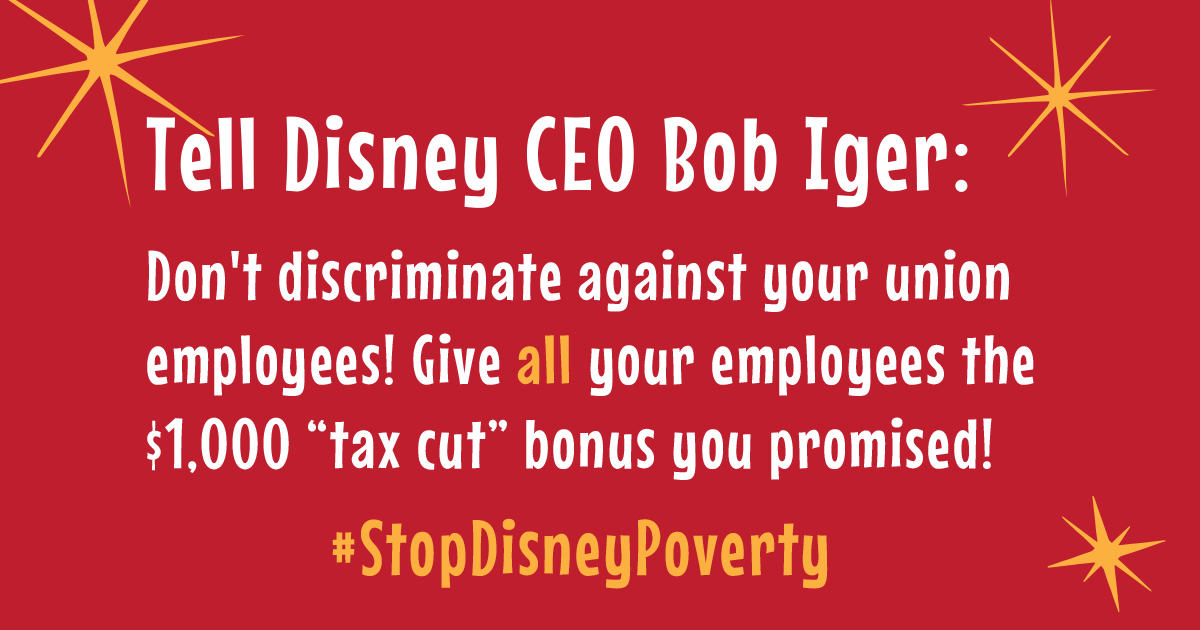 As a result of the federal tax cut, Disney promised that its employees would get $1,000 bonuses. Disney offered the bonuses to most of its employees with no conditions. But for 41,000 union members in Orlando, Florida, and Anaheim, California, Disney is requiring them to agree to the company’s contract proposals in order to get the bonus.

In December, Disney workers in Orlando rejected the company’s offer of a 50-cent pay raise, far below the livable wage that Disney’s employees are fighting for. A new report shows that the overwhelming majority of Disney employees who responded said they do not earn enough for basic expenses every month.

Meanwhile, the tax cut will bring Disney some $2 billion every year. Giving every Disney employee the promised $1,000 bonus would cost Disney $125 million. The report on Disney employees revealed that more than 10% of working people at Disneyland resorts have been homeless or have not had a place to sleep in the past two years.

Yeweinisht “Weiny” Mesfin was one of those Disney employees who was homeless. Weiny’s former co-worker, Vanessa Munoz, told Weiny’s story to Left Voice:

The first month working with her in restrooms was hard. She had her own ways of doing things, and as soon as I got to know her, I knew what she liked and what she didn’t. She was good at her job and never once did I hear her complain about her job or her pay.

Every day she had a pear or apple for lunch and occasionally a muffin. Sometimes she’d buy me lunch and refuse to have me pay her back. So I would secretly pay for her muffins or lunch whenever I saw her walk into the cafe. “No, darling! It’s OK,” was her reply whenever the lunch lady would tell her that her meal was paid for. She would then come to me and thank me but, the next day, would beat me and secretly buy me lunch. She was like that with everyone, not just me. If you had a birthday, she would chip in and help buy you a cake. Because that was the type of person she was. She was a kind person who was loved by everyone….

November 2016: Weiny goes missing right after Thanksgiving weekend. Working for almost five years for this company now, I was used to seeing people come and go. Some went and just never came back. Sometimes you saw it coming and sometimes you just didn’t. I wasn’t ready for her to go, and I never thought I’d see her go.

It took about a month for us to find her. It took endless messages, Facebook shares, phone calls and driving around. All it took was a message from her cousin that Wednesday morning in December. “We found Her. She is passed. Thank you for all that you did” was what it read. My heart dropped, and I wanted to just disappear. I felt like what I did wasn’t enough. I felt like I was to blame.

She didn’t have enough money to get her own place, and my heart broke because all she did was give and give. Never once did she complain. But behind that smile and “good morning, darling” lived a whole different person. A woman struggling and working eight-hour shifts for six days for a company that didn’t even bother helping with flower arrangements. For a company that took and took from her and terminated her on the spot after her third no call, no show. A company that asked for her costumes back as soon as possible so they can give them to the next re-hire.

Someone out there on third shift at Disney now wears my Weiny’s beanie, her sweater, shirts and pants. Someone out there is about to give as much as Weiny did for a company that refuses to pay the employees an affordable living wage.

Read the rest of the story and take action today by telling Disney to pay all of its employees the promised $1,000 bonus.