Why I Chose a Union Voice at Thrillist 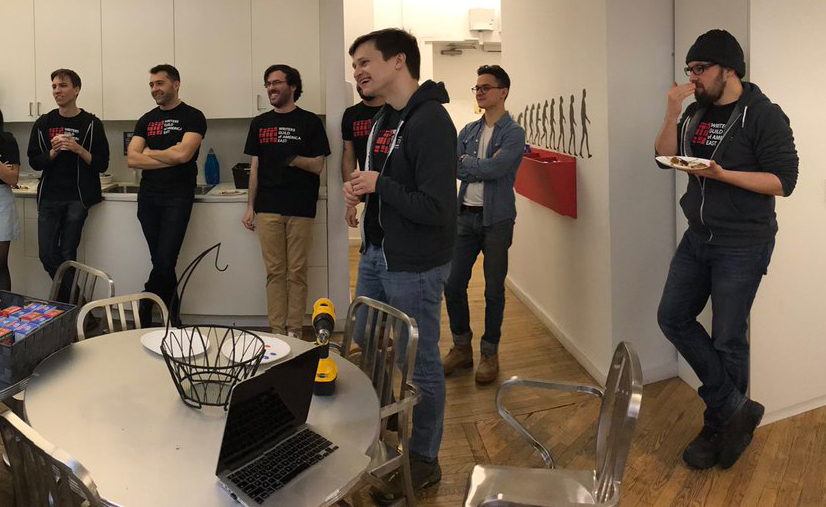 Why I Chose a Union Voice at Thrillist

Shortly after news broke that Thrillist had secured a $100 million investment as part of a deal to merge with three other digital properties and create a new media behemoth, a few of us on the editorial staff began discussing the possibility of unionizing. We’d watched the process play out in digital media for the first time at Gawker (now Gizmodo), followed by Vice, Huffington Post and others. But, as one colleague put it in those early days, Thrillist seemed like a place where there was too much turnover, too little cohesion to make any serious attempt at organizing realistic.

That’s more or less how I felt, too—everyone tried to keep a nostril above water in the endless sea of internet content, we were on our own and I still felt “new,” even though I’d worked at Thrillist more than a year. On top of it all, I had zero organizing experience. But after we received assurances that no one would lose their jobs in the wake of the new investment (the proverbial kiss of death), those of us who’d talked decided there wasn’t much to lose. In a job where the product is instant, ephemeral, subject to the whims of a Facebook or Google algorithm, unionizing offered us a chance to create a lasting structure to secure benefits that easily fall by the wayside in an industry that, as we saw, makes money.

So I started talking to people, at every word in every conversation awaiting the inevitable, “I’m not interested in organizing.” It never came. Virtually everyone who’d spent significant time working in digital media shared similar experiences: working long, thankless hours toward unclear goals; receiving few or no benefits; adapting to an employer’s business “pivots,” which often rendered past work irrelevant; having little job security and no safety net; and working in offices with little diversity and less transparency. For many employees, myself included, Thrillist was the best job any of us had ever had in digital media; all the more reason to preserve and improve it.

For many employees, myself included, Thrillist was the best job any of us had ever had in digital media; all the more reason to preserve and improve it.

Luckily, my partner happens to be a member of the Writers Guild of America, so she gave me the contact info for someone at the Writers Guild of America, East, (WGAE); a few hours after first emailing them, I had coffee with Justin, a WGAE organizer, and less than two weeks later, we had our first larger meeting with employees. After that night, I think the speed in which the process moved took everyone by surprise, but it happened, thanks to the strongest, most focused group effort in which I’ve participated.

Megan, our organizer, worked tirelessly and relentlessly, fielding emails, calls and texts from what is, stereotypically, a somewhat neurotic group given to overcommunication (it’s in our blood). Everyone on the organizing committee put in hours of conference calls, one-on-one conversations, happy hour chats and emails trying to round up support for a union.

That last bit, fortunately, was relatively easy. When the inevitable layoffs—accounting for around one-third of our group—hit, we’d just about reached the point at which we felt comfortable with strong majority support. By the time we announced our intention to unionize, less than a week later, more than 80% of staff had signed union cards.

Management didn’t take the news too well. After ignoring our formal request for voluntary recognition, upper management pulled edit staff into an anti-union meeting, where we were warned that organizing would interfere with the good relationships we’d forged with our managers, force people to talk through a lawyer, and reduce our flexibility as a company and workplace. The effect, essentially, was to add insult to injury. People got fired up, and thanks to some quick work by the organizing committee and a strategic pizza delivery (diversity of tactics) from the WGAE, staff signed a letter that week that said, essentially: We’re not dummies, we still want to unionize.

We’re not dummies, we still want to unionize.

To no avail. Once management rebuffed the letter, we pushed the envelope by publicizing our experience. If you’re in the business of media, the one thing that hurts you as much, if not more, than any other tangible labor tactic is negative press. A few hours following publication of Hamilton Nolan’s Deadspin article, media folks and WGAE members, in true solidarity, showed the ultimate 21st century sign of union support: Tweeting at our CEO.

Hey @Thrillist and @BenjLerer, still time left in the workday for you to quit wasting everyone’s time and recognize the #ThrillistUnion.

And it worked! Hundreds of writers and WGAE members picked up the #ThrillistUnion hashtag, mentioned our CEO by name, pointing out (some more politely than others) the hypocrisy of claiming to be progressive while asking employees not to form a union. The outside counsel management had retained reached out to the WGAE quickly, and within a week, we’d consented to an online vote that would, for the third time, confirm the fact that we wanted to unionize. With around 95% of voters choosing “yes,” we became members of the Writers Guild of America, East.

The project is far from over, though, and it certainly doesn’t end with Thrillist. Digital media is ripe for organization, which doesn’t just protect editorial employees who bring value to companies that, in some cases, are valued at more than $1 billion; it also benefits the consumers of media those employees produce. When many of the entry-level jobs are unpaid, or pay so poorly and offer so few benefits that working in the industry effectively becomes the right of the privileged, can we expect to read fair, balanced stories that reflect the diverse nature of our society? When the CEOs of media companies cash in while refusing to pay writers, should we sit down, click through and shut up?

When one of the biggest producers of digital media on the planet preps for an IPO next year that will make a few people many millions of dollars, while its founder has made it clear he believes unions are a bad idea, should any of us feel good about the kinds of stories we click on absentmindedly while scrolling through social media?

The answer, in solidarity, is no.

Anthony Schneck is a Thrillist writer and member of the Writers Guild of America, East.