Voting Rights for Millions at Risk in Supreme Court Case 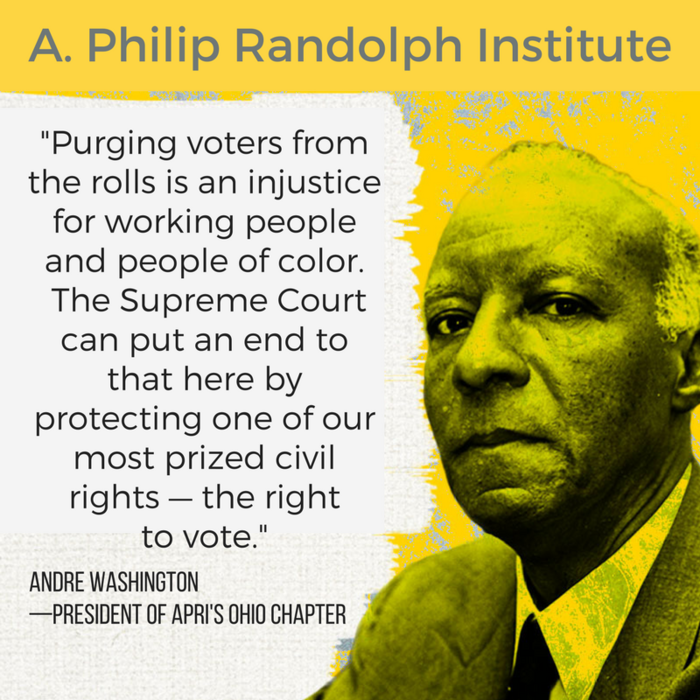 Voting Rights for Millions at Risk in Supreme Court Case

The U.S. Supreme Court is hearing a monumental case that will impact voting rights.

The case, Husted v. A. Philip Randolph Institute (APRI), challenges a procedure the state of Ohio uses to remove voters from the registration rolls based on their failure to vote. The precedent set by this Supreme Court case will have ramifications for voting rights for generations and, if the court decides against APRI, it could potentially harm entire swaths of the voting public.

APRI argues that Ohio’s voter purge procedure violates the National Voter Registration Act—sometimes called the Motor Voter law—which prohibits a state from removing a person from the voter registration rolls because of that person’s failure to vote. The 6th U.S. Circuit Court of Appeals agreed with APRI that Ohio’s removal procedure violates federal law, which prompted Ohio Secretary of State Jon Husted to ask the Supreme Court to weigh in. Under Ohio’s process, if a registered voter does not vote or update their registration during a two-year period, the county board of elections will send a postal notice to the voter asking them to confirm their registration at that address. Recipients of the notice are removed from the rolls if they neither respond to the notice nor subsequently vote during the following four-year period.

For many people—including working people and especially low-wage workers—voting is not easy and this “use it or lose it” policy is unfair. Limited voting hours, erratic job schedules, child care needs, the closing of neighborhood polling places, inadequate or inaccessible transportation and the costs associated with obtaining a photo ID, to name just a few obstacles, mean that many eligible voters are unable to cast ballots on Election Day—despite registering where necessary, being motivated to vote in the particular election and, in some cases, even arriving at the correct polling place and waiting in line. As a result, Ohio’s voter purge procedure falls disproportionately on those citizens for whom various features of the voting process already present significant obstacles to participation.

At a time when we should all be working to bring our government closer to the people, voter purges like Ohio’s disenfranchise many voters who wish to have their vote counted. A bad ruling in this case could allow states hostile toward voting rights to undermine the Motor Voter Act by purging voters from the rolls just because they did not vote in certain elections. It’s happened before, and it will keep happening unless the Supreme Court sides with APRI and with the voters of Ohio.

We need to resist these cynical and unfair attacks on our democracy. And we need to stand up for our right to vote. Our future and the future of our democratic institutions depend on it.

Pierrette “Petee” Talley is secretary-treasurer of the Ohio AFL-CIO.