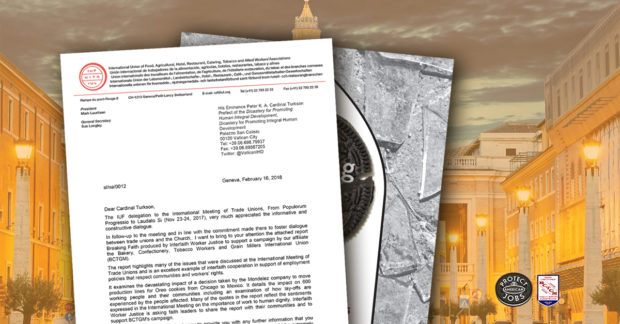 The Bakery, Confectionery, Tobacco Workers and Grain Millers’ (BCTGM’s) campaign against the outsourcing of North American Nabisco jobs has generated widespread support. From U.S. congressional leaders, university students, union trade and justice activists to American veterans and consumers, the message carried by Nabisco workers across the nation has resonated loud and clear: Stop the global exploitation of workers that is devastating families and communities.

In the last half of 2017, a coalition of faith and labor representatives, led by Interfaith Worker Justice, conducted a six-city investigation of Nabisco bakeries across the United States and Mexico. The group studied the impact of the company’s business practices in cities where BCTGM members produce Nabisco products in Mondélez-Nabisco bakeries.

In late November, the IWJ coalition traveled to Monterrey and Salinas, Mexico, to learn more about workers and the working conditions at the Mondélez plants. While in Mexico, the Nabisco workers were met by a priest from the Catholic Archdiocese of Monterrey to detail the harmful impact of Mondélez-Nabisco’s outsourcing in the United States.

At the conclusion of the five-month investigation in December 2017, IWJ released a detailed report, Breaking Faith: Outsourcing and the Damage Done to Our Communities, that reveals the impact of Mondélez-Nabisco’s outsourcing and exploitation of workers in both the United States and Mexico.

The report has gained the attention of the global faith community. The general secretary of the International Union of Food Workers, Sue Longley, has sent a letter to Cardinal Turkson at the Vatican requesting support from the highest levels of the Catholic Church. The IUF represents 2.5 million workers in 130 countries.

The international scope of this campaign continues to escalate, as the chorus of voices from the faith community grows in opposition to the devastation caused by Mondélez-Nabisco.

Click to read the IUF letter to Cardinal Turkson at the Vatican.