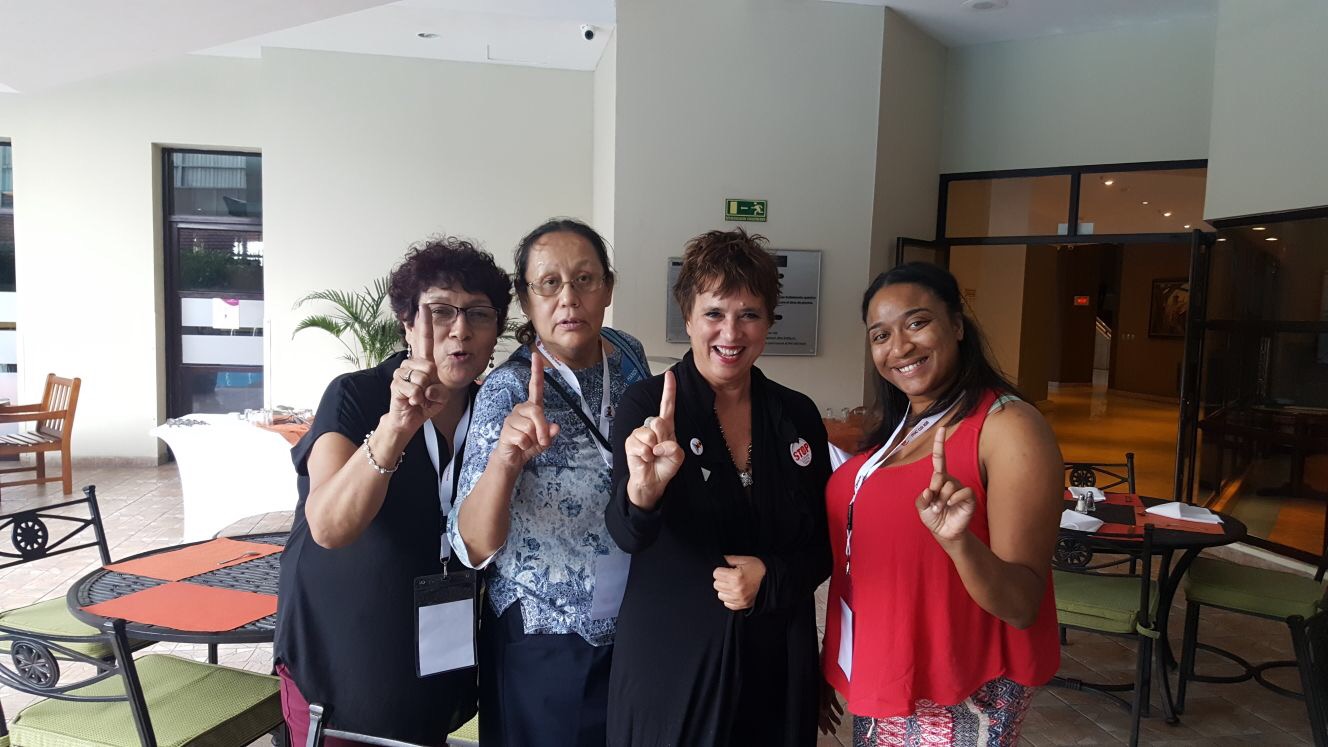 UNITE HERE Local 1 was invited to share about the “Hands Off Pants On” campaign and recent legislative victory in Chicago. Local 1’s delegation included Tina Graham, Ofelia Martinez and Kasey Nalls, rank-and-file members who helped survey nearly 500 women working in Chicagoland hotels and casinos about sexual harassment, the results of which gave rise to the “Hands Off Pants On” campaign. The final day of the conference included a screening of the video featuring President Jorge Ramirez of the Chicago Federation of Labor and other male union leaders speaking out about sexual harassment. Also in attendance was award-winning playwright Eve Ensler, who interviewed the UNITE HERE Local 1 team for a new project about workplace sexual violence.

Get the inside scoop from the UNITE HERE Local 1 team members! Read their reflections about the ITUC Women’s Organizing Assembly:

I felt proud to represent UNITE HERE Local 1 at the ITUC Women’s Organizing Assembly and share our “Hands Off Pants On” campaign with women from around the world. It was incredible to feel the love and support from them as we talked about what we accomplished here in Chicago. In fact, the first day of the conference was the day we officially won a new city law to protect hotel workers from sexual harassment and assault! Another highlight was when we were interviewed by the playwright, Eve Ensler. I shared about my experiences working as a room attendant in a Chicago hotel and about our “Hands Off Pants On” campaign to end sexual violence in the hospitality industry. I know our “Hands Off Pants On” campaign will change the lives of women in hospitality for the better. And now our work is helping push something bigger—a global movement to make work safe and fair for all working women. I’m so proud to be a part of it.

At the Women’s Organizing Assembly of the ITUC, I learned how important it is for us to continue to organize and bring a message of hope and strength to working women around the world. Wherever we find sexual violence, we will assert our rights and will not keep quiet. The conference reminded me that when we unite, we are a force that can change the world.

My favorite part of the conference was meeting people from all over the world and learning how much we have in common [regarding] the struggles we go through as women. The strength and power of all the women as one in that room was phenomenal. I felt very proud that women union leaders from many different countries were interested in understanding our “Hands Off Pants On” campaign, the steps we took, and the different approaches that were used to bring awareness to the problem of sexual harassment in the workplace. It was amazing to talk with Eve Ensler during the conference. I am proud that my union sisters and I are a part of her new project about gender violence at work, where our stories will be brought to life. I am forever grateful and blessed to have the opportunity to take part in such an event.