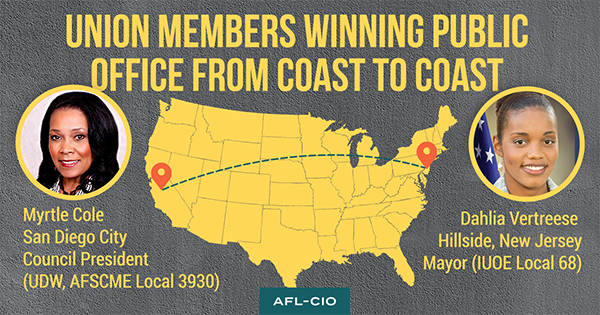 This week, working family advocates won electoral victories from coast to coast, with Dahlia Vertreese winning election as mayor of Hillside, New Jersey, and Myrtle Cole being re-elected as president of the San Diego City Council.

These victories are part of a larger trend, where a strong independent union movement provides the support and expertise to help ensure that when working people run for office, working people win.

Strong independent union movements at the state and local level have been growing for years, and now the impact is being felt at a national level as we define a pro-worker agenda committed to the issues that matter most to working people everywhere.

Working people win when working people run. The New Jersey State AFL-CIO’s record says it all. A total of 965 union members have won office in that state’s program, with an annual win ratio of more than 70%.