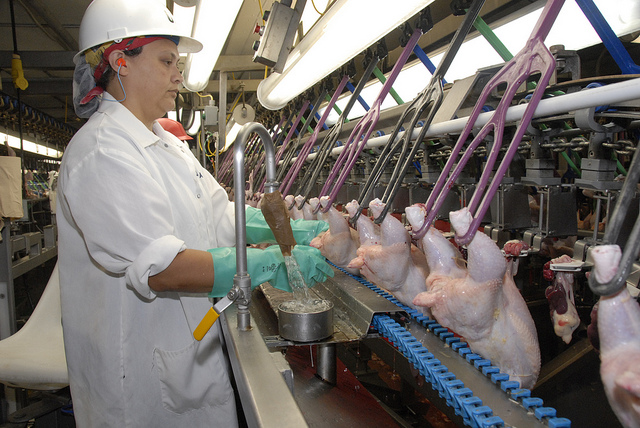 She ran to the conveyor belt, where she saw five-pound bags of wingettes piling up and falling on the floor. Then, she immediately pulled a switch and stopped the line.

Just 10 days earlier, this would not have been possible. Only managers had the power to stop the line. But thanks to a recently instituted reform worked out between Local 400 members and Tyson management, any worker has the power to halt the entire production line if he or she witnesses a safety hazard, as Aleta did.

“We’re supposed to have 10 to 13 people on our line, but since I’ve been working there, we’ve only had six,” Aleta said. “On that day, there were just four and one was a new person being trained while the line was running. It was too much too fast for too few people. That’s why the chicken was piling up and why I stopped it.

“A manager came back, asked what was going on and I explained what happened,” she recalled. “He said, ‘Take your time—I’ll try to get two more people for your line.’ They never came, but he told us to work at our own pace. So about 10 minutes later, we were able to get things back up and running, and we adjusted the speed so we weren’t overwhelmed.”

Aleta makes a point of being safety conscious: “One day several months ago, I was rethreading the Packmat machine,” she said. “It’s not supposed to turn on when the door’s open but the trip wire was blown and that’s what happened. It ripped the sleeve off my smock and could have taken my arm off. It scared the living daylights out of me. We had a standing room only emergency meeting afterward to address the problem.”

A combination of union activism and management concerned about the company’s reputation elevated the importance of safety and the need to empower workers to take action. Tyson launched a national program called “We Care,” with the direct input of the UFCW. The first plant to implement the program was the Glen Allen plant, thanks to monthly meetings between workers (including Aleta) and plant managers—meetings required by the collective bargaining agreement between Local 400 and Tyson.

“I’ve seen a difference in management since we’ve had these monthly meetings,” Aleta said. “The atmosphere is a lot different. They’re taking us seriously when we make recommendations and following through. And not just on safety—the meetings also led to improvements in the pay process and our ability to schedule personal days. There are things we need to work on—like better-staffed lines and an end to 10-hour workdays—but it’s coming along. And our union has been so helpful in all of this.”

Thanks to these efforts—and the courage and decisiveness Aleta showed—safety protections for Tyson workers are getting stronger every day.