Trumka: We Will Vote to Elect Your Replacement Next Year 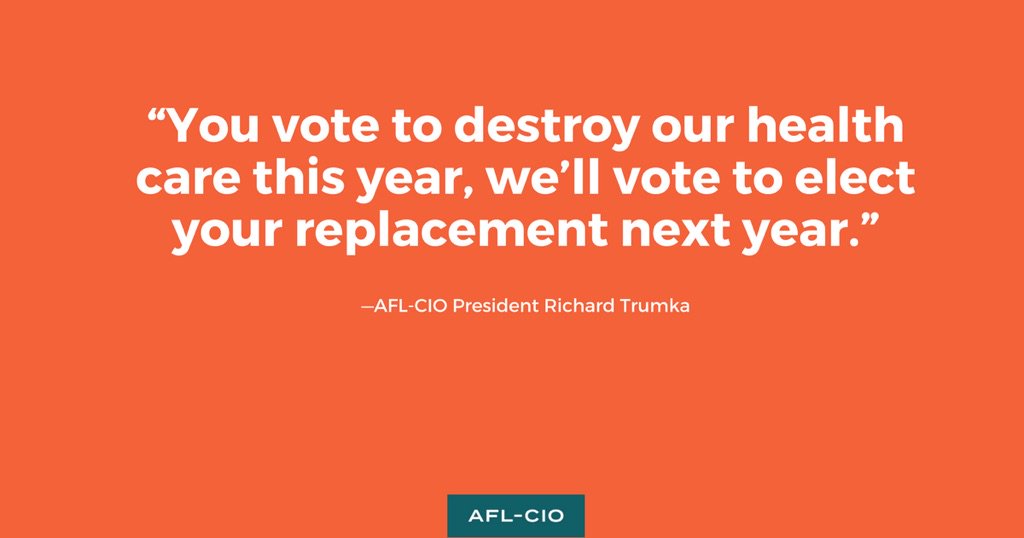 Trumka: We Will Vote to Elect Your Replacement Next Year

We have to act now to protect our health care and make sure that Congress is accountable to the American people. Contact your members of Congress today (call 1-866-829-3298 for the House or 1-888-865-8089 for the Senate). If they voted for repeal, let them know how that vote affects your life. If they voted against repeal, thank them for standing beside you and the millions of other Americans who will be harmed by this legislation. If they are in the Senate, call and tell them to vote against the bill when it arrives in their chamber. Congress also is going into recess this week, meaning that many members will be holding town hall meetings in their districts between now and May 15. Go to these town halls and make sure your voice is heard. (A list of events can be found here. Tips for participating in your town hall are here.)

Many of the Republicans who voted for this legislation didn’t even read it. It’ll take a while to unpack all the ways this bill hurts Americans (start unpacking here). It’s going to be particularly harmful for women, people of color and working people. For instance, the bill repeals every tax included in the Affordable Care Act except the so-called Cadillac tax. This means that union members will continue to be taxed on their health care benefits while the wealthiest Americans and big insurance companies would get a massive tax cut.

“If you vote to destroy our health care this year, we’ll vote to elect your replacement next year.” – @RichardTrumka https://t.co/uniZJ7UayY

#AHCA isn’t a health care plan at all. It’s a massive transfer of wealth from workers to Wall Street.