Trumka: Unions Are Needed Now More Than Ever 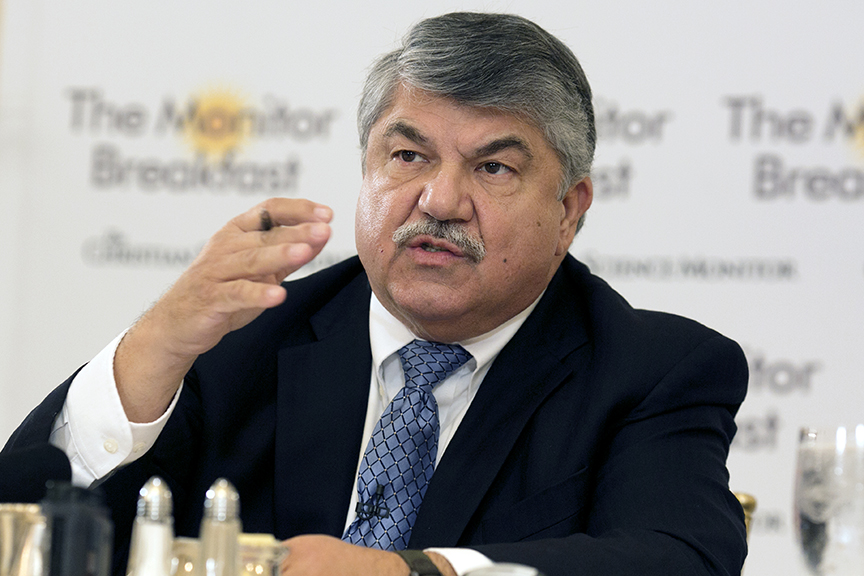 Trumka: Unions Are Needed Now More Than Ever

This week, AFL-CIO President Richard Trumka was the guest at the Christian Science Monitor breakfast, where he explained the importance of the union advantage, both for union members and for all working people.

In his opening remarks, Trumka said:

And here is the good news: The popularity of unions is rising. A Pew survey shows 60% of Americans support unions and that number is even higher among millennials. And in our Labor Day poll, a majority of working people said they would vote to join a union tomorrow if given the opportunity.

So let’s give them that chance—free from the employer interference and intimidation that has become all too common.

Whether it’s raising wages, paid leave, gender and racial equality, or simply the freedom to negotiate for a better life, unions are needed now more than ever. We can help deliver the economic rules working people are hungry for. That’s our focus and mission this Labor Day and beyond.

Here is some of the key media coverage of Trumka’s visit to the Christian Science Monitor breakfast:

Talking Points Memo: Union Leader: White House Is Divided Between ‘Racists’ And ‘Wall Streeters’: “Richard Trumka, the president of the nation’s largest labor union, the AFL-CIO, told reporters Wednesday morning that he has no regrets about quitting the Trump administration’s manufacturing committee in the wake of the president’s response to the violence in Charlottesville.'”

New York Daily News: Top Labor Leader Says There’s No Working with ‘Racists’ in the White House: “‘A lot of the optimism has faded,’ Trumka told reporters. ‘We haven’t seen the things that we were hopeful that we could work with him on.’ Trumka also released a new study commissioned by the AFL-CIO at the breakfast that found a majority of Americans would join a union if given the chance. It also found that most people are overworked and underpaid—although union members fare better than nonunion workers.”

Los Angeles Times: AFL-CIO President: ‘Calling the President Names, Even if They’re Accurate, Gets You Nowhere’: “Trumka, reared in one of the Pennsylvania coal towns that Trump swept in the election, said that telling voters who supported him that they were stupid to do so is also a strategy for failure. Instead, he said, Democrats need to make the case to those who gave him the benefit of the doubt that Trump has not done what he promised.”

The Hill: AFL-CIO Chief: Trump Torn Between ‘Racists’ and ‘Wall Streeters’: “Although the council was ultimately disbanded by the president, Trumka said that it had never been a functioning body in the first place. ‘The [manufacturing] committee itself, it never was a vehicle to provide real policy solutions. In fact, the committee never met,’ he said. ‘It became a way to get every regulation they didn’t want to deal with off’ the books. ‘They didn’t have any solutions for helping manufacturing.'”

HuffPost: AFL-CIO Leader Says Hope for Working with Trump Has Faded: “For all Trump’s talk about the working class on the campaign trail, his domestic policy agenda so far has looked a lot like a wish list for the U.S. Chamber of Commerce. His agencies have been busy stalling or repealing regulations at the behest of the industries they are supposed to police, including many worker protections important to the AFL-CIO. Trumka said the White House has done little that his union federation would approve of so far.“

Christian Science Monitor: How Big Labor Is Wooing Working-Class Trump Voters Back to Democratic Fold: “‘Giving people information is the way to move people,’ he said. That means, for instance, pointing out that while Trump promised health care for everyone, he supported a GOP plan that would have eliminated it for millions, said Trumka. Or that the president’s rollback of regulations has included rollback of worker standards. Or that Trump has yet to get an infrastructure plan through Congress, even while his trade renegotiation efforts on NAFTA are only in their earliest stages.”