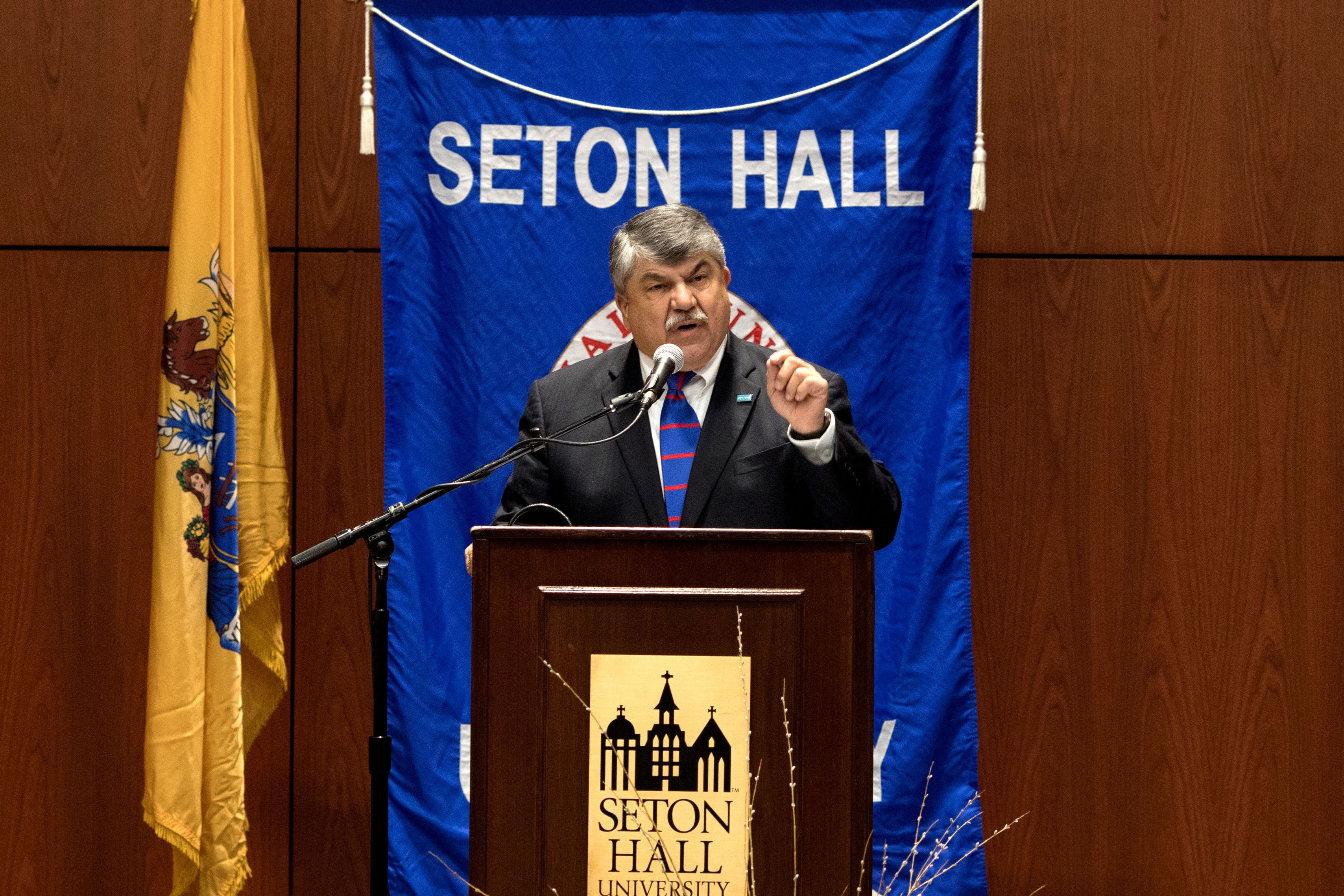 Ahead of the fifth anniversary of Pope Francis’ election, AFL-CIO President Richard Trumka praised the pontiff’s leadership and legacy, in an event at Seton Hall University. He was joined by Cardinal Joseph Tobin, archbishop of Newark; Gov. Phil Murphy of New Jersey; and Mary Meehan, Ph.D., interim president of Seton Hall, each of whom delivered remarks to commemorate the Holy Father’s leadership of the Roman Catholic Church.

Trumka said: “Pope Francis reminds us that our fate as a labor movement, our strength and our solidarity grows from our choice to be reborn in the defense of our neediest brothers and sisters. Today, only one in 10 of America’s workers has the ability to bargain collectively with our employers through a union. Yet our labor movement defends the other nine workers every day.”

New Jersey State AFL-CIO President Charles Wowkanech added: “Our labor movement depends on having faith in one another, and there is much that religion can teach us about coming together in common purpose and mutual respect. The history of our labor movement is closely intertwined with the values of faith and, thanks to the leadership of Pope Francis, Cardinal Tobin and the New Jersey religious community, that bond is as strong as ever.”

More of Trumka’s remarks from the commemoration:

Five years ago, Pope Francis was elected to the papacy. From his first moments as pope, he ministered to a world deeply hurt by the financial crisis of 2008 and its aftermath—where it seemed at every turn working people paid the price for unmitigated greed on Wall Street. Pope Francis came to Rome from South America to preach to a world in which many millions had been fundamentally marginalized and forgotten—facing the loss of jobs, the foreclosure of homes, the burdens of sickness and old age without adequate security, and the trauma of homelessness. The people of the global south suffered the most endemic and desperate situations…extreme poverty and total exclusion from the fabric of society. In his every act, Pope Francis extended an elegant and simple message: “You are not alone….”

All around us people are appealing to our worst selves, baiting us to fear and hate anyone who seems on the surface to be different. Voices sowing division and distrust tell us to admire the thief, the con man, the bully and to look down on humble workers…nurses, teachers, ironworkers and sheriff’s deputies. When Pope Francis says solidarity is our word, his message contradicts the morality adopted by so many of the world’s wealthy and powerful. His message is an affront to selfishness. It breaks isolation. It welcomes the outcast. It exposes the illusion and reveals the truth, which is that we are bound together by love, and we must care for each other and our world….

The labor movement is resolved to fight for and win collective bargaining for all of America’s workers, because, like Pope Francis, we believe the poor must be the agents of their own development. The future of humanity does not belong to the elites and the powerful, but to all of us and our ability to organize for a fair piece of the pie. We will defend our democracy against those who urge us to hate and fear, and who say greed will answer our need. It will not and cannot. And we will see to it that the gains of technology are shared among all.