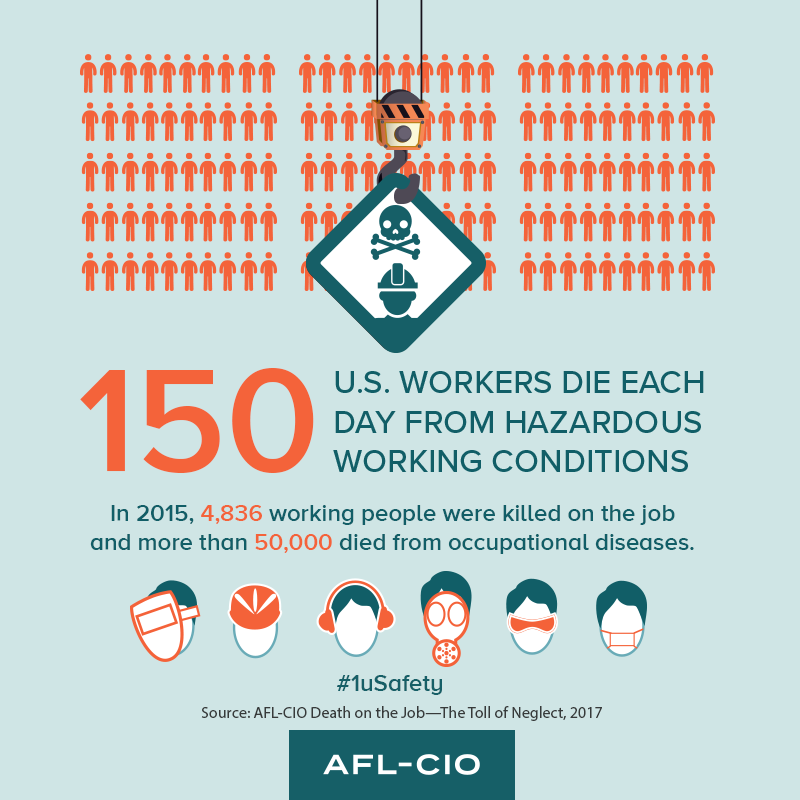 In 2015, 150 workers died each day from hazardous working conditions. This year is the 26th year the AFL-CIO has published a report on the state of safety and health in the workplace, Death on the Job: The Toll of Neglect, which compiled 2015 injury and fatality data from the Bureau of Lanor Statistics and FY 2016 enforcement data from the Occupational Safety and Health Administration. Here are some of the findings from the report:

What industries are most dangerous?

Deaths on the job are increasing for people who work in construction, transportation, and agriculture, forestry, and fishing. People working in logging, fishing, roofing, truck-driving, and landscaping occupations were particularly at high risk of dying on the job.

Who is at the highest risk of dying on-the-job?

Older people are dying on the job at a higher rate than the overall workforce population. People ages 65 and older are nearly three times more likely to die from work-related causes.

What about serious injuries or getting sick from work?

Many working people have work-related injuries and illnesses that are severe and debilitating, and impact their livelihoods. It’s estimated that 6-9 million people become seriously injured at work, or become sick from toxic chemicals. We need to make sure workers can report injuries at work without fear of retaliation, and need a better system for counting occupational illnesses.

What are we doing to prevent workplace deaths?

OSHA–the agency in charge of protecting all working people in the U.S.–has consistently been underfunded, understaffed and penalties remain too low to be a deterrent for employers. The average federal OSHA penalty for a serious violation is only $2,402. Twenty-six years ago, federal OSHA had the capacity to inspect each workplace once every 84 years; now that capacity is once every 159 years.

Unions are fighting to keep the job protections that we have won, for stronger safeguards on-the-job, and for improved OSHA resources to keep workers safe.

Have workplaces gotten safer and what does the future hold?

Since the OSHA law was passed in 1970, workplaces have gotten safer and job fatalities and injuries have declined: More than 553,000 workers’ lives have been saved. Under the Obama administration, OSHA and MSHA strengthened enforcement, issued new safeguards on silica, coal dust, and other hazards, and expanded worker rights. But now, under the Trump administration, this progress is threatened. Trump has already repealed two worker safety rules and delayed others. He has proposed to slash the budget for the Department of Labor and job safety research and to eliminate worker safety and health training programs and the Chemical Safety Board. Workers’ safety and health is in danger.

What can be done to prevent workplace deaths?

We must defend the worker safety and health protections we have won, and we must move forward. We will continue working for safe jobs for our union brothers and sisters, as well as fighting for protections and representation for all working people.

The nation must renew its commitment to protect workers from injury, disease and death.