The Senate Is in a Hurry to Cut Our Health Care 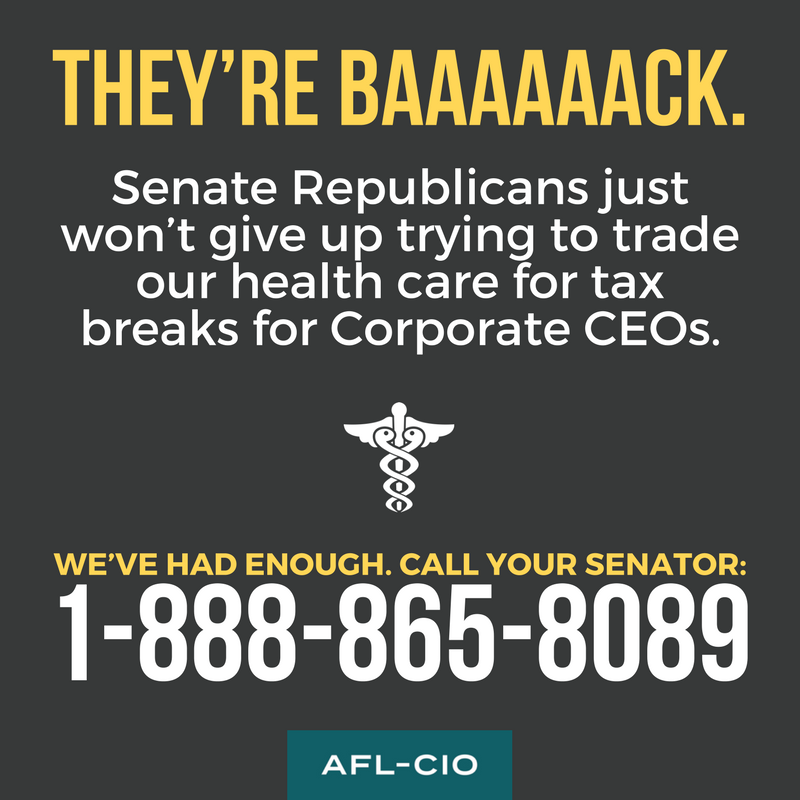 The Senate Is in a Hurry to Cut Our Health Care

Do you remember “Repeal and Replace,” “Repeal and Run” and “Skinny Repeal”? Those were all plans pushed by the Senate Republican leaders at the end of July in a frantic, failed attempt to repeal the Affordable Care Act (ACA) and make massive cuts in our health care. Millions of working people stood up and spoke out to stop those cuts. Now, however, Republican leaders are back, just as desperate but hopeful they can sneak something through.

The media are calling the new Senate Republican proposal the Graham-Cassidy plan because two of its lead authors are Sens. Lindsey Graham (R-S.C.) and Bill Cassidy (R-La.). A more accurate way to think of it is as “Repeal, Replace and Run.”

This plan wipes out major parts of the ACA. There are no more federal tax credits to help the middle class pay health insurance premiums. No more Medicaid expansion for low-income working people. No airtight ban on discriminatory premiums for people with pre-existing medical conditions. Insurance companies can impose an age tax by charging older Americans up to five times what they charge young adults. Employers are let off the hook completely: No employer would be required to contribute toward any worker’s health care; but the 40% tax on middle-class worker health benefits would be made permanent.

In place of much of this, the federal government would give out time-limited block grants to states to do with what they please. This money would run out in 10 years, unless Congress votes to extend it. Graham and Cassidy designed these block grants to shift costs to states, providing much less money, on average, than people in a state would get under the ACA. On top of that, they end the federal funding guarantee for Medicaid, the program that covers the more than 70 million people who are struggling the most to make ends meet. They convert federal support for Medicaid to capped amounts per person, which they designed to shrink over time compared to the cost of the medical care that it needed.

Republican leaders are pushing hard to pass something before the end of September. That is when time officially expires on their attempt to repeal the ACA and cut health care using a special rule. This allows them to pass a highly partisan bill with just 50 votes.

Republican leaders are in such a rush that they plan to vote on the bill before they even know fully what the bill will do. Congress’ independent budget experts say they will not be ready with an analysis of what the bill does to the federal budget or health care coverage until sometime in October. Congressional Republicans are prepared to do this despite warnings from other experts that this bill could take health care away from as many as 32 million people. This is like buying a used car before you get the Carfax report you ordered. When that report finally comes pointing out all the defects, however, there is no “lemon law” to let the American people return this clunker of a bill.

If you’ve had enough, call your senators at 888-865-8089 and tell them not to take health care away from millions of Americans.