The Answer to Exploding Inequality: Working People Standing Together 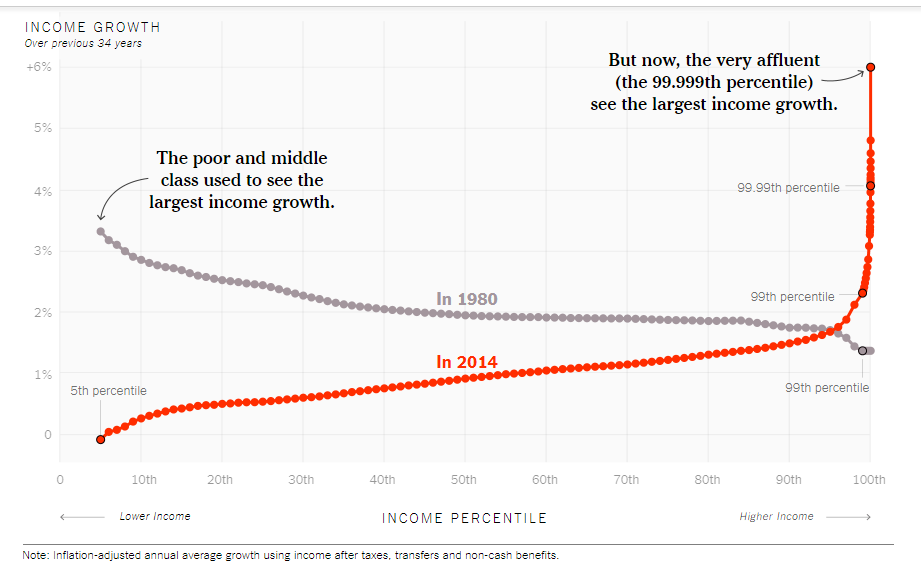 The Answer to Exploding Inequality: Working People Standing Together

The New York Times published a chart this week that perfectly summarizes how the United States has gone from having the healthiest middle class in the world to a land of increasing economic inequality that shuts out far too many families from the American dream.

A well-known team of inequality researchers—Thomas Piketty, Emmanuel Saez and Gabriel Zucman—has been getting some attention recently for a chart it produced. It shows the change in income between 1980 and 2014 for every point on the distribution, and it neatly summarizes the recent soaring of inequality.

The line on the chart (which we have recreated as the red line above) resembles a classic hockey-stick graph. It’s mostly flat and close to zero, before spiking upward at the end. That spike shows that the very affluent, and only the very affluent, have received significant raises in recent decades.

While instructive, this chart leaves one very important question unanswered: Why? When you dig a little deeper into the data, one striking fact simply can’t be ignored: The decline of union membership tracks perfectly with the rise of inequality.

In 1979, roughly 25% of all U.S. workers were union members. For those workers, that meant regular raises, decent benefits such as health care and retirement security, and workplace safety protections on the job. But even if you didn’t belong to a union, you indirectly benefited from high union density. Strong unions drove wages in nonunion industries upward, CEO-to-worker pay ratios were much lower than they are today, and there was a powerful counterbalance to corporate greed.

But in the ensuing years, corporate special interests, backed by the politicians they bankroll, engaged in an all-out assault on unions. As union membership declined, the wages that used to go into workers’ pockets instead went straight into the bank accounts of corporate CEOs and well-heeled executives. Today, just 1 in 10 workers belongs to a union. And with current attacks through the courts and the Trump administration on working people’s freedom to stand together in unions, that number could dip even lower in coming years.

The bottom line is this: There’s only one way out of this abyss. It’s giving working people the opportunity to stand together to negotiate with their bosses for fair wages, good benefits and a better life. All other solutions to inequality are just nibbling around the edges of the problem. Without strong unions, inequality and its disastrous consequences for our future will never go away. Time to give workers back some of the power they’ve lost. Time for America to become #UnionStrong once again.