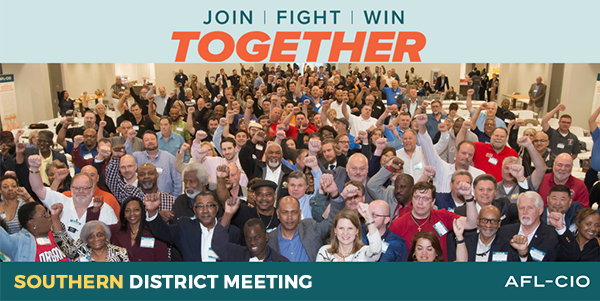 “Today we are going to focus on ways our unions can accelerate change, be bold, and meet the challenges of our time.” @lizshuler addresses over 300 Southern labor leaders in New Orleans #1u pic.twitter.com/neMrzVr0Ux

Shuler acknowledged recent victories in the South and the importance of building on that momentum. Those wins include:

“Our test of 2018 and beyond will be to build on these successes,” said AFL-CIO President Richard Trumka in a video address to attendees. Two panels dove further into the achievements and challenges we face in the states and featured state federation presidents from Alabama, Arkansas, Florida, Georgia, Kentucky, Louisiana, Mississippi, North Carolina, Tennessee and Virginia.

Florida, Virginia, Tennessee, Mississippi, and Arkansas State Federation leaders talk about the opportunities to create worker power in their states #1u #organizethesouth pic.twitter.com/zGHchB1KGI

State federation leaders from Louisiana, North Carolina, Georgia, Alabama, and Kentucky lead a discussion with over 300 Southern labor leaders to talk how they’re building power for working people in their states #1u pic.twitter.com/7jAVu38rLb

Breakout sessions gave participants the tools they need to build a stronger labor movement in the South. Sessions focused on internal organizing, using issues to engage our members and allies, building a program to elect union members to political office, and using data and technology to break new ground in politics and organizing.

Participants left feeling energized and ready to increase worker power. Attendee Cheryl Eliano, national vice president of AFGE District 10, said, “Too often we work in silos, so I wanted to see how we can work more collaboratively as a labor movement. We need a change of course. If we leave here with a new mindset and put what we learned to action, we’ll be a stronger labor movement.”