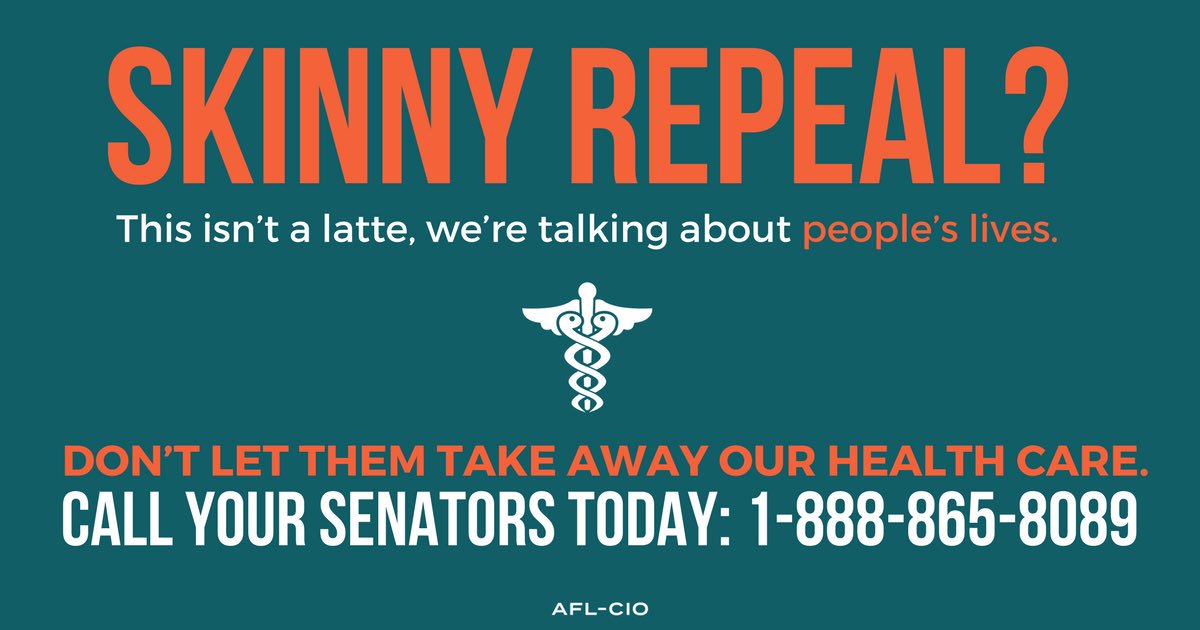 Yesterday, two major proposals that would have rolled back the Affordable Care Act’s progress in expanding coverage were defeated by bipartisan majorities. Senate leadership is now pulling together a so-called “skinny” bill, which they hope will attract the 50 votes needed to pass the chamber and move to a conference committee with the House.

The “skinny” bill would likely end selected ACA provisions—the ACA’s requirement that individuals have health coverage, the employer coverage requirement, and perhaps the tax on medical device manufacturers. No legislative language has been released, so we do not know the bill’s precise contents. But the CBO produced a score showing that, by destabilizing the individual insurance market and sharply increasing premiums, such a bill would cause 15 million Americans to lose their health insurance in 2018, rising to 16 million soon thereafter.

Yesterday, this bill sparked an extraordinary outpouring of opposition, including from governors, doctors, and insurers:

Proponents of this new and still secret proposal have brazenly advertised its purpose. Pieced together from abandoned elements of rejected Republican legislation, the “skinny Frankenstein” bill is primarily a tactical ploy.

By enabling a health care conference committee, the Senate’s passage of this bill would let Republican leaders meet behind closed doors and devise the biggest possible health care repeal that can be jammed through the House and Senate on a party-line vote.

Once the final “Trumpcare” plan emerges from the conference committee, congressional leadership will try to push it through at warp speed, hoping to keep the American people from learning about the plan until it is too late to stop.

Believe it or not, Senate Majority Leader McConnell has yet another fallback plan in his pocket. If the bait-and-switch ploy fails, the House could simply agree to the “skinny repeal” bill, producing the enormous, immediate coverage losses warned about by the CBO, the bipartisan governors’ letter, the AMA, and the Blue Cross Blue Shield Association.

Health care for millions of Americans is at stake

If the Senate approves this as-yet-unveiled skinny Frankenstein bill, a conference committee could produce almost any legislation that takes away health insurance from millions of Americans. Health coverage and care thus remain on the chopping block for 74.5 million people who rely on Medicaid for their coverage, 12.2 million people who have private coverage through health insurance marketplaces, and millions more who purchase individual coverage outside a marketplace.

So far, every health care proposal put forth by the current Republican leadership would take away health insurance from more than 20 million people while raising costs, cutting benefits, and ending consumer protections for millions more. There is no reason to expect anything markedly different to emerge if the Senate authorizes a conference committee to devise a final bill.

What to do now

The top priority is ensuring a defeat of whatever skinny Frankenstein plan emerges in the Senate, since such a plan would authorize continued covert efforts to take away health insurance from millions of Americans.

So far, constituent pressure—in the form of phone calls, rallies, emails, and more—has prevented the Senate from approving any repeal legislation. That is an extraordinary achievement, but the fight continues.