Shuler: ‘What Unites Us Is Work and the Desire for a Better Life’ 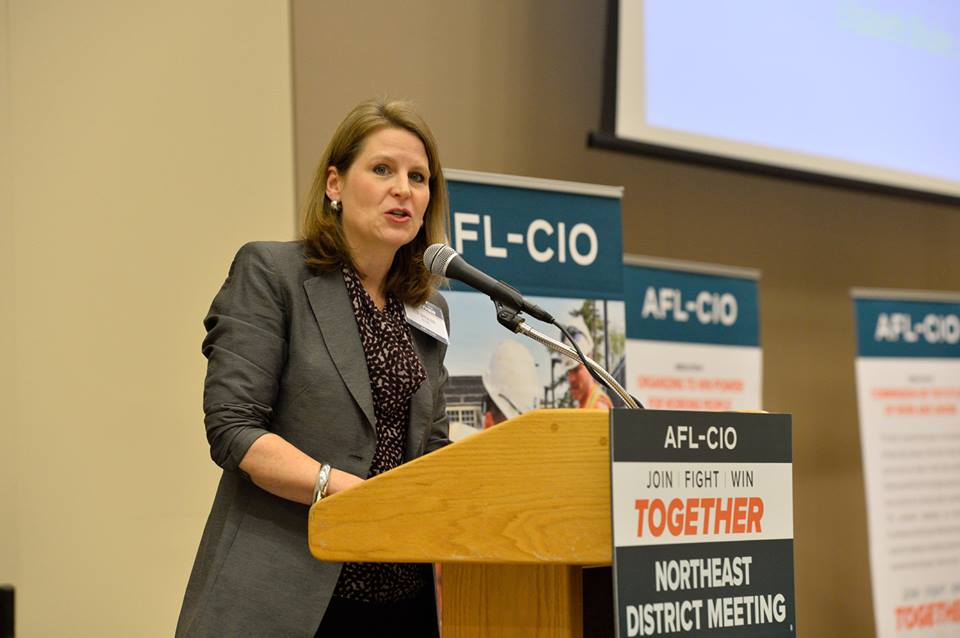 Shuler: ‘What Unites Us Is Work and the Desire for a Better Life’

“Our movement is made up of working people of all parties and ideologies,” AFL-CIO Secretary-Treasurer Liz Shuler told a crowd of more than 300 labor leaders and activists gathered at the AFL-CIO Northeast District Meeting in Silver Spring, Md. “What unites us is work and the desire for a better life. Improving the lives of union members and all working people must be our guiding light in politics.”

Representatives from state federations, central labor councils and affiliate unions across the Northeast region discussed the stakes of the 2018 elections and how the labor movement can win for working people. Participants at the conference heard from their counterparts in other states on how to achieve those victories, including analysis of the current political landscape, member engagement strategies and campaign planning.

Two panels of state federation presidents reviewed their own unique challenges and opportunities in their respective states. The first panel included representatives from Puerto Rico, Maryland, Delaware and West Virginia, who explained how the labor movement can grow amid challenges such as natural disasters and unrelenting legislative attacks on working people.

The second panel included state federation presidents from Massachusetts, New Hampshire, Vermont, Rhode Island and Maine. Common themes in this discussion were the need for political independence, the need to hold politicians of both parties accountable and the need to increase the movement’s power through organizing.

A series of breakout sessions offered participants the chance to get up to speed on important emerging trends in the labor movement, including the use of Common Sense Economics, member engagement strategies, internal organizing, and establishing new paths to power in developing a state federation-based union member candidate program. Special thanks to Charlie Wowkanech, who shared insights on how the New Jersey AFL-CIO has been able to elect thousands of union members to public office. As he said, “You can’t go through a town in New Jersey without running into one of us.”

This was the second of several regional meetings the AFL-CIO is organizing for early 2018. The others are in Chicago; Buena Park, Calif.; Detroit; New Orleans and Las Vegas.