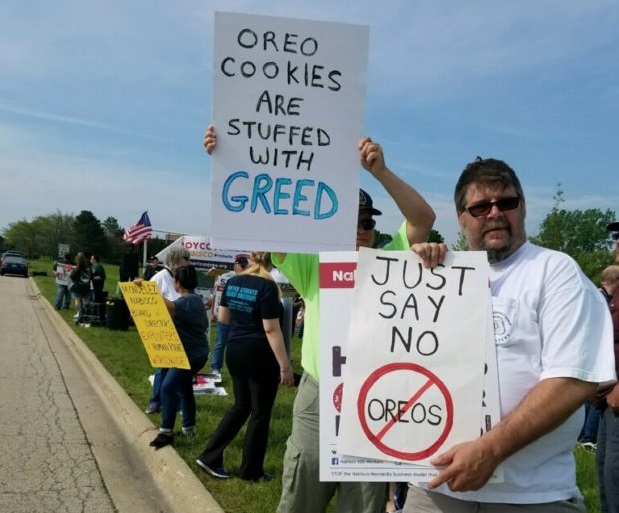 Mondelēz International’s offshoring of jobs and the company’s relentless cost-cutting came under repeated criticism at the Mondelēz annual shareholder meeting on May 17 in Lincolnshire, Ill. Outside the shareholder meeting, members of Bakery, Confectionery, Tobacco Workers and Grain Millers (BCTGM), United Food and Commercial Workers (UFCW) and other unions protested the company’s 2016 decision to move 600 Nabisco factory workers’ jobs from the Southside of Chicago to Salinas, Mexico.

Inside the meeting, BCTGM Vice President Jethro Head introduced an AFL-CIO shareholder proposal that urges the company to form a labor-management committee to seek alternatives to plant closings. Head highlighted the impact of recent plant closings, explaining that “these communities are the poster child for economic insecurity that is plaguing so many American cities and towns.”

UFCW Vice President Mark Lauritsen spoke in favor of the shareholder proposal on behalf of the International Union of Food Workers (IUF), a world-wide federation of trade unions: “Mondelēz workers around the world are demoralized and worried about the future direction of the company,” he said, adding that “Mondelēz should be investing for the future rather than endlessly cutting costs.”

Anthony Jackson, a former Mondelēz employee whose job was offshored from Chicago to Mexico, challenged Rosenfeld’s business plan for the company: “Rather than improve revenue growth, the company has cut costs to increase its profits,” Jackson said. “Why not treat your workers fairly and improve the company’s reputation in the communities it operates?”