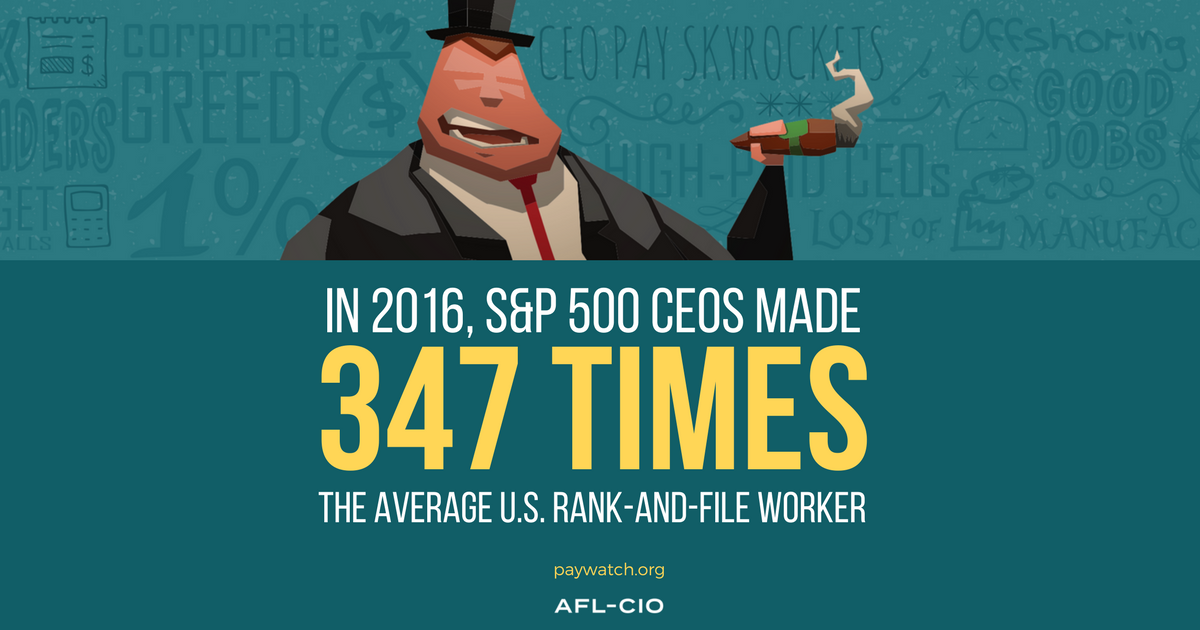 The right-wingers at the American Enterprise Institute just can’t seem to accept the fact that runaway CEO pay is increasing inequality. Their latest solution to the growing gap between CEO and worker pay: abolish the weekend! According to AEI, if everybody worked a 60-hour workweek, then the CEO-to-worker pay ratio would be only 132:1 instead of 347:1.

But don’t American CEOs work long hours? I am sure many of them do. But what about Bear Stearns’ CEO, who famously played cards during the Wall Street financial crisis? Or CEOs such as Elon Musk and Steve Jobs who simultaneously serve as CEO of two companies? Perhaps these superhuman CEOs work 120-hour workweeks, 17 hours a day, 7 days a week?

AEI complains that the AFL-CIO’s Executive PayWatch pay data for rank-and-file employees doesn’t include fringe benefits. Alas, the Bureau of Labor Statistics pay data that PayWatch cites does not include the value of perks such as personal use of the corporate jet or country club memberships that many CEOs enjoy. This “all other” category of CEO pay totaled on average $484,586 for Standard & Poor’s 500 companies in 2016.

But what about pension benefits and health care? While this may shock the well-paid lobbyists at AEI, fewer than half of all nonunion workers participate in a retirement plan. And CEO pay disclosures do not include the value of health insurance (except for the cost of the so-called “executive physical” perk that is completely unnecessary, according to medical professionals).

The AFL-CIO calculates the CEO-to-worker pay ratio by dividing the total compensation of S&P 500 CEOs by the Bureau of Labor Statistics pay data for production and nonsupervisory workers. This is the same methodology used by Businessweek for its long-standing annual survey of CEO pay. Back in 1980, Businessweek estimated that the CEO-to-worker pay ratio was just 42:1.

This isn’t the first time AEI has produced fake facts to try and hide runaway CEO pay. Last year, AEI claimed that the average pay for chief executives was a mere $220,700 in 2015. To support this outlandish claim, AEI cited pay data of the most senior executive of every workplace in America. In other words, the “CEOs” of retail stores, fast food restaurants and every other place people work.