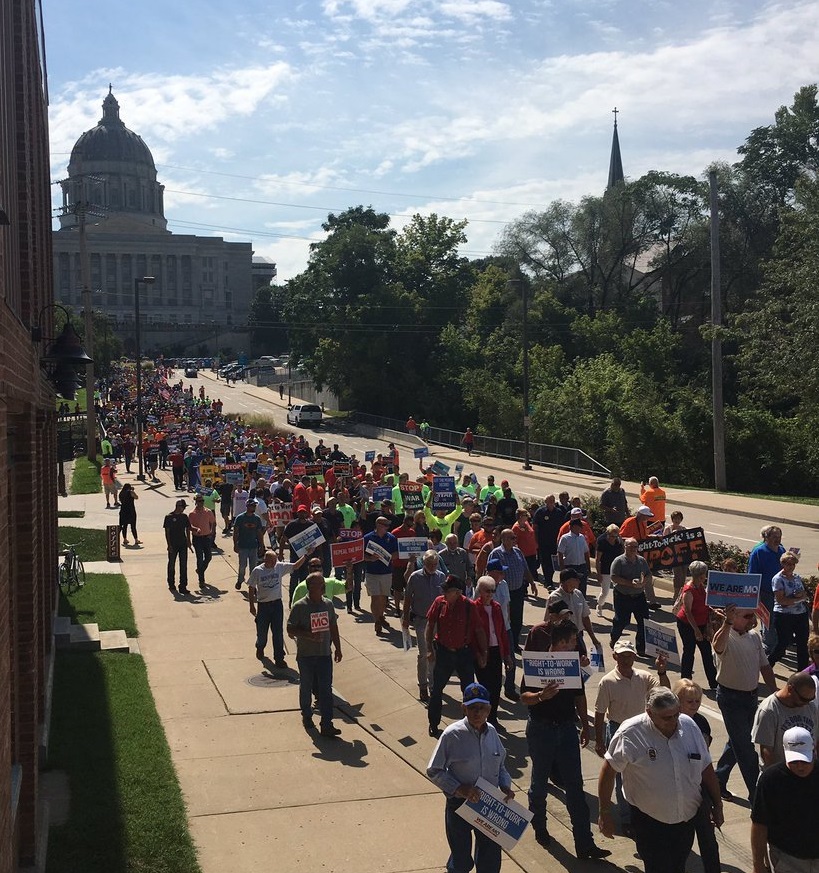 Extremists and outside interests representing big corporations rammed through a Right to Work bill, against the will of the people of the state. The bill signed into law by Gov. Eric Greitens in February. Today, Missourians spoke up loudly and, pending the certification process, a ballot referendum on Right to Work will appear on the November 2018 ballot.

In order to get on the ballot, supporters must gather approximately 107,510 signatures in 6 of 8 congressional districts. Hundreds of Missourians showed up to cheer along campaign representatives, who delivered 163 boxes filled with 57,277 pages, containing 310,567 signatures, nearly three times the required amount. All of the state’s 115 counties were represented, and the numbers were sufficient to qualify in all eight congressional districts.

Here is what Missouri’s working people said about right to work and the referendum:

“This referendum will guarantee that Missouri employers and their employees can work together in the best interests of their businesses without government interference,” said Dennis Palmer, a small business owner from Columbia.

“We’ve come together and put in countless hours gathering signatures from voters at festivals, community events, door-to-door canvasses, parades—you name it,” said Bobby Dicken, an electrician from Butler County. “These folks who’ve signed the petition want their voices to be heard—they want voters—not politicians—to make the final decision on whether so-called Right to Work becomes law in Missouri.

It’s official! 310,567 delivered to the Secretary of State to let the people vote. Together we win! #RepealRTW pic.twitter.com/89DksTHdXw

Missouri is making history. This is a game-changing rebuke of a rigged economy. #RepealRTW #1u pic.twitter.com/JKxLbaFS6X

Working people gathering from all over Missouri to deliver a strong message: right to work is wrong! #MOleg @MOAFLCIO pic.twitter.com/VVCisFL94H

Even the little ones know that RTW is WRONG for Missouri. pic.twitter.com/jmBYVSr1pS