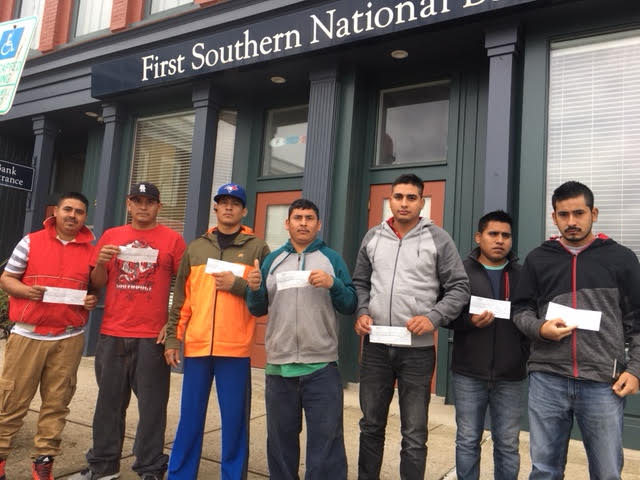 “After organizing a successful mediation with this farmer and his H-2A guest workers, he told me he needed a union, too,” said the Louisville-based Bartlett, who spoke at the recent Kentucky State AFL-CIO convention in Lexington.

Organizing immigrant labor on Kentucky farms might seem like mission impossible. Donald Trump won almost 63% of the Bluegrass State’s vote and carried every rural county. But Bartlett, with FLOC leaders and lawyers behind him, made it “mission accomplished.”

The strikers, who have returned to their homes, stopped working for Day because over a three-year-span, he refused to pay thousands of dollars he owed them, Bartlett said.

After they discovered that Day was cheating them, the workers contacted Bartlett and joined the union. They don’t speak English, but he speaks Spanish.

On Sept. 19, Bartlett handed Day a letter demanding that he pay the workers back wages to reach the H-2A minimum wage. Day told the workers that if they didn’t like what he was paying them, they could go home.

The farmworkers stayed put and went on strike Oct. 11. He said the workers hope to return to work on other farms next spring. They also said they would help him organize other immigrant workers.

Bartlett said most farmers treat their H-2A workers fairly and obey the law. “I tell them that FLOC has no gripe with farmers who do right by their workers. Our dispute is with the large corporations that squeeze the farmers and their laborers.”

Bartlett said the Green County farmer told him about his problems with the big tobacco companies that buy his leaf. “He said the price he gets has been stagnant for two decades. We mean it when we say to farmers that FLOC could be their union, too. Family farmers in Kentucky and elsewhere absolutely need a union to collectively fight for better prices.”

Bartlett said FLOC’s aim is to raise tobacco worker wages to $15 an hour. He said that’s possible only if growers get a fair price for their tobacco.

“I look forward to helping FLOC make more inroads into the farmworker sector here and to the day we achieve a broad agreement that would signify greater justice and dignity for those who are most marginalized—immigrant and migrant farm workers,” Bartlett said.

“FLOC is proud to be part of the AFL-CIO and to join the righteous struggle for a true economic democracy that will insure the respect and dignity the workers deserve. After all, it is the workers who create all the wealth, not the capitalists, using their bodies and creative minds to transform raw materials into useful products.”