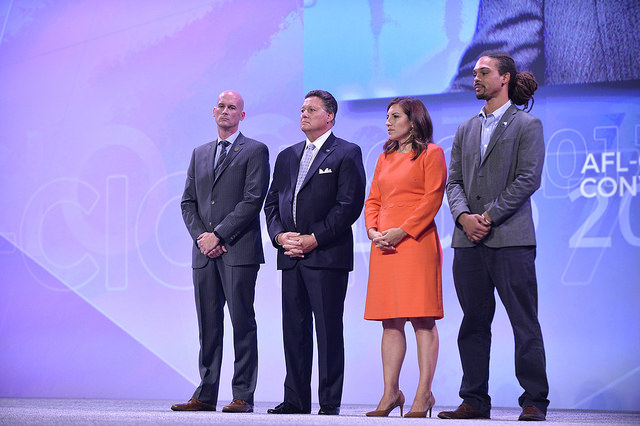 The three union member candidates who addressed the 2017 AFL-CIO convention won their elections! This came shortly after the adoption of Resolution 10, “Encouraging Union Members to Run for Public Office,” that pledges to adopt labor candidate programs in every state and local labor body in the country.

Teresa Mosqueda (OPEIU) will join the soon-to-be majority-woman Seattle City Council; Braxton Winston (IATSE) will be the first union member to serve on the Charlotte, North Carolina, City Council; and Keith Kazmark (AFT) was re-elected as mayor of Woodland Park, New Jersey. Their communities will benefit from the kind of legislation that improves the lives of working people.

AFL-CIO President Richard Trumka has been a strong advocate for electing our members to public office:

The only way we can change the economic rules is by committing ourselves to independence in politics. The rules are written by the people we elect, and for nearly four decades, they have been written to ensure working people are the losers. Electing people like Teresa, Braxton and Keith ensures that we have a seat at the table. We will continue to work to elect candidates who share our vision to build strong unions, raise wages, and support quality public education, health care for all, modern infrastructure, American-made energy, voting rights, civil rights and worker rights.

President Charlie Wowkanech of the New Jersey State AFL-CIO has helped 900 union members win election since he began the program two decades ago:

President MaryBe McMillan of the North Carolina State AFL-CIO was rightfully proud of the caliber of union member recruited to run for Charlotte City Council:

We are excited and proud to have one of our own on the Charlotte City Council. As both a community activist and a union activist, Braxton built connections across the Charlotte community. Braxton is smart, energetic and committed to justice for all working people. With his vision and leadership, I’m confident that he will make Charlotte a better place to live and work.

And President Jeff Johnson of the Washington State Labor Council highlighted another important aspect of this work in building our movement:

To say we won a seat on the city council just scratches the surface of what Teresa’s victory means for us. Yes, we have a champion for working people at the table, and I couldn’t be more proud of her, but we also have a movement of workers who are more energized, more engaged and more active because they fought to elect one of their own. Today, the long arm of worker power stretches from the shop floor to city hall.

It’s not just about electing people, but about the achievements working people make when working people lead. When working people have political power, great things happen in America: the middle class grows, wages rise, social justice is served, communities thrive. After passing Resolution 10, “Encouraging Union Members to Run for Public Office,” and Resolution 2, “An Independent Political Voice,” it is thrilling to see these three union members win their elections to advance the freedom of working people.

This message was re-emphasized by AFT President Randi Weingarten, who saw a number of AFT members win elections last week:

AFT member Keith Kazmark was one of countless union members, including AFT members in Connecticut, New Jersey, New York, Pennsylvania and Virginia, elected or re-elected on an Election Day on which Americans delivered two messages. They won’t support fear-mongering and race-baiting, and they will elect candidates who truly care for and fight for people and for the values that are important to working folks—public education, affordable health care and good jobs. Union members connected with voters on these values because these are the values we fight for every day on the job and through our unions. Congratulations to Keith and all of the union members who won on Election Day. We need more union members like Keith in our mayor’s offices and our statehouses and on our school boards.

If you had the chance to hear them speak at convention, then undoubtedly Keith, Braxton and Teresa made an impression on you. Each of them give great hope for the future of our movement.

Nearly 200 union members or union household members won election last Tuesday. See the still-growing list. A bigger picture of the Election Day victories is featured on our blog, Labor-Backed Candidates Win Big in Tuesday’s Elections. If you have a story to share, please contact us to get it included.

Thank you for everything you do to support working people having an An Independent Political Voice.