Infrastructure Week Highlights the Need to Invest in the U.S. 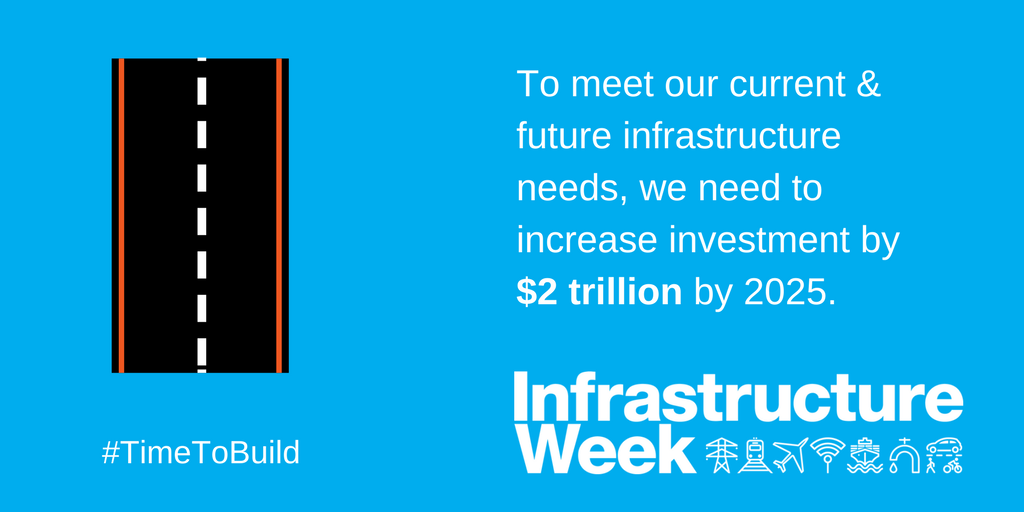 Infrastructure Week Highlights the Need to Invest in the U.S.

This week is Infrastructure Week, an annual event where an increasingly powerful coalition led by local, state and federal leaders, as well as both businesses and labor unions, demand massive and necessary investments to build America. This year’s Infrastructure Week comes at a time when 80% of voters say investing in America’s infrastructure is a top priority. America’s labor movement says the time to build is now.

As unions, businesses, engineers and policy makers celebrate Infrastructure Week from May 14–21, we’re reflecting on the investments that add value to America. For every dollar a country spends on public infrastructure, it gets back nearly $3, according to a 2014 study from the International Monetary Fund.

Keep this in mind when you hear that the American Society of Civil Engineers, or ASCE, has called for $2 trillion to repair, renovate or replace water lines, public schools, bridges and mass transit systems. On top of that, another $2 trillion could make America the global leader in the infrastructure technologies of the future, such as high-speed rail and smart utilities.

That kind of serious infrastructure spending would create countless jobs in manufacturing. Enacting ironclad Buy America provisions would kick-start production in steel and other battered industries, putting millions of people to work and lifting wages. These broad economic benefits explain why year after year, the AFL-CIO joins with the U.S. Chamber of Commerce to ask Congress to invest in America’s national infrastructure.

Laborers (LIUNA) General President Terry O’Sullivan also wrote about the importance of investing in our shared resources and shared future:

For too long there’s been too much talk, too little action and far too little investment in our country’s crumbling critical infrastructure. As a result our transportation systems are failing, our water resources are antiquated, our energy systems are out of date, and our nation’s ability to compete is hindered….

During Infrastructure Week, solutions will be highlighted, such as adjusting the federal gas tax and implementing a vehicle miles traveled fee to generate investment, as well as, state efforts to pump more investment into our transportation systems….

No one solution will be enough. What is a certain, though, is that it will take significant national investment to keep our bridges from continuing to deteriorate, better maintain our roads, and improve the reliability of our water.

Here are some of the most important areas where we need to invest in our infrastructure:

Learn more at Infrastructure Week or read about the AFL-CIO’s commitment to investment in infrastructure.