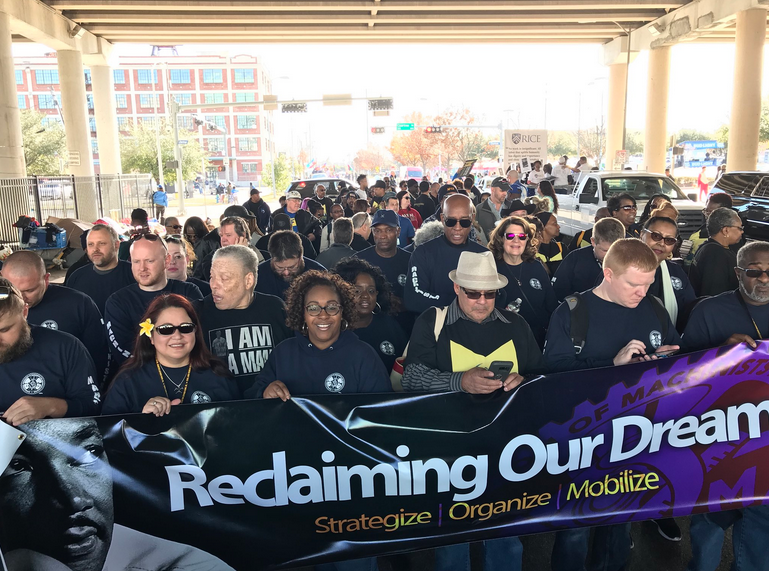 This past weekend in Houston, the AFL-CIO hosted its Dr. Martin Luther King Jr. Civil and Human Rights Conference, with a theme of “Reclaiming Our Dream: Strategize, Organize, Mobilize.” Hundreds of working family advocates came together to shift the rules and build power so that working communities can thrive and families can enjoy the fruits of their labor.

Here are some key tweets from the weekend:

#Labor “can’t be the middle of the spear. We need to be the tip of the spear” in fighting sexual harassment., @RichardTrumka tells #1uMLK. #AFLCIO #TxAFLCIO pic.twitter.com/Apl2ws3sPL

‘Colin Kaepernick had a lot to risk and yet he took action. There’s a whole lot to learn from the courage he showed. If the flag means anything, it means the right to protest and speak out’ @richardtrumka #1uMLK

Awesome to see so many people participating in the @AFLCIO #1UMLK inclusion workshop pic.twitter.com/WU9Bsbmpwe

Union members are powering the food sorting operation at @HoustonFoodBank for our #1uMLK Day of Community Service pic.twitter.com/G3idLyKXY6

TWU Members working in a disaster relief food bank to provide basic needs for families. Standing together as a Union family helping those who need help in Houston. #1uMLK @transportworker pic.twitter.com/EEtXa472hg

To honor Dr. King is to work every day to dismantle racism. #1uMLK pic.twitter.com/vs76h7TIVJ

Dr. King taught us how to confront an unjust power structure. Labor has the infrastructure to fight the horrible extremism we’re facing in this political moment. We know how to get it done. – @LCLAA Exec Director @Hesanche to #1uMLK pic.twitter.com/0IYBzP7z8q

.@Rafael_Navar National Political Director for @cwaunion – We have to double down on the most important resource of our movement, our people. We have to develop political programs that turns them into future Dr. Kings and Fannie Lou Hamers #1uMLK pic.twitter.com/N6E47bLMPe

Even in the darkest hours I feel hope in our movement, because our movement has the most courageous and selfless leaders I have ever met – Sec-Treasurer @lizshuler introducing @APWUnational Sec-Treasurer Liz Powell, At the River Where I Stand awardee #1uMLK pic.twitter.com/AYjr7eEt14

Working people honor the life & legacy of Dr. Martin Luther King, Jr. We will always march ahead, together. #1u #1uMLK #MLKDay pic.twitter.com/0nJzYcoonW