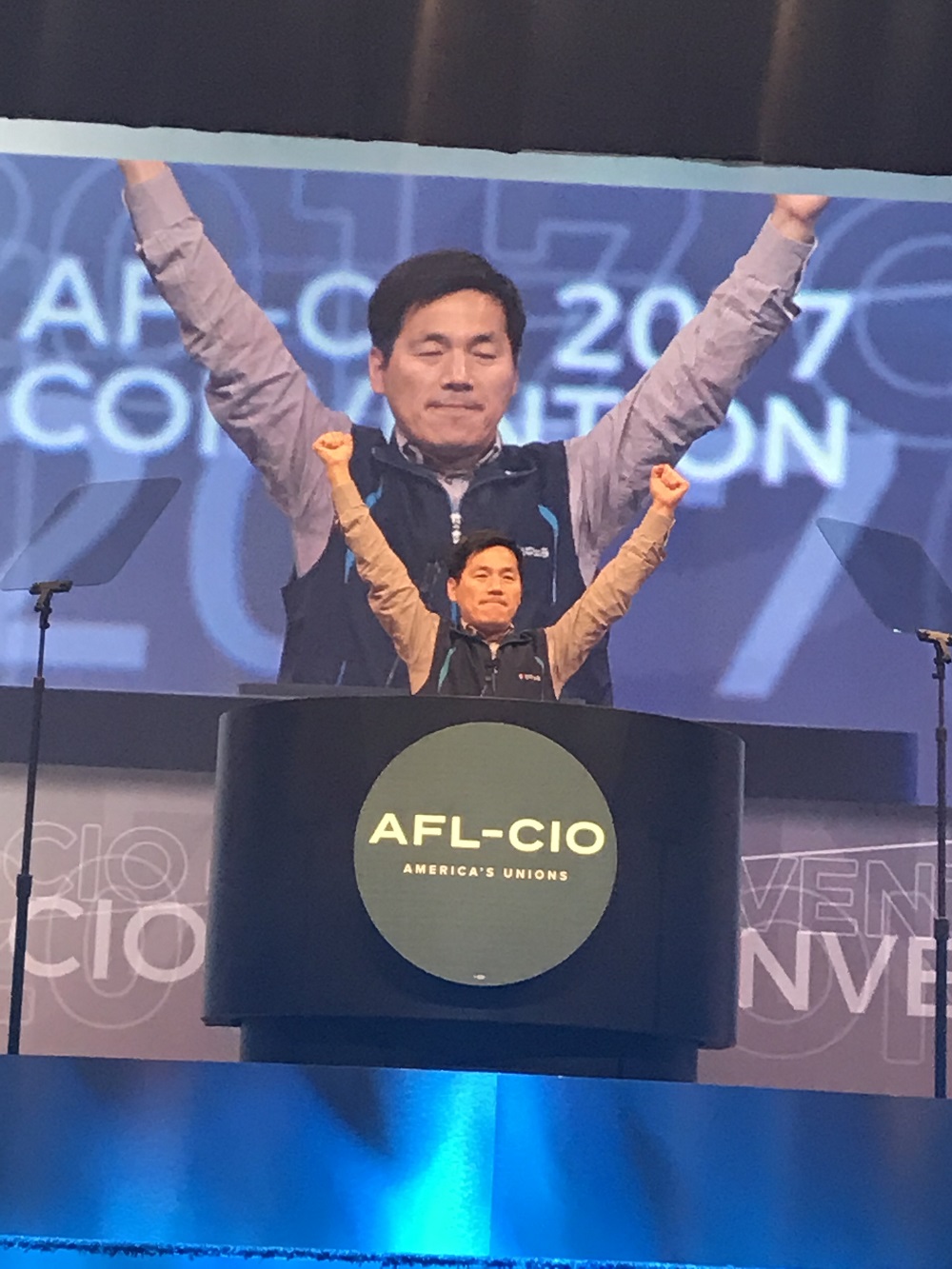 At the AFL-CIO convention in St. Louis, President Richard Trumka honored the imprisoned president of the Korean Confederation of Trade Unions (KCTU), Han Sang-gyun, with the George Meany-Lane Kirkland Human Rights Award. Han has been in jail since December 2015, serving a three-year sentence for defending trade union rights and fighting back against corporate corruption and the repressive government of former President Park Geun-hye.

Each year since 1980, the AFL-CIO has recognized outstanding examples of the international struggle for human rights through trade unions. Han is honored for his perseverance in the face of anti-democratic repression and leadership in a transformational period in Korean history.

Accepting on Han’s behalf, KCTU Vice President Kim Wook-dong said, “Our movement has been at the forefront of calling for democratic change in our country and challenging the corruption of CEOs and our former president.”

Han has spent his life fighting for the rights of workers. During South Korea’s years of military rule in 1980s, Han helped organize a union in his auto manufacturing plant. He went on to lead that union in an occupation of the auto plant with 1,700 other workers, demanding an end to layoff and severance concessions.

Kim continued: “Together, we need to continue the struggle. We look forward to deepening our solidarity and strategic partnership with the AFL-CIO and all its affiliates.”

In honoring the powerful work of Han, the KCTU, Dennis Williams, president of the Auto Workers (UAW), reminded the audience that: “Repression of workers and unions has no place in a democracy.”

Under Han’s leadership, workers mobilized against anti-worker labor legislation and government corruption in a series of massive peaceful demonstrations. The movement forced the ouster of President Park Geun-hye and led to corruption charges for her and the heads of a number of powerful Korean conglomerates, but not before authorities arrested Han and other activists after riot police disrupted a march.

South Koreans voted in a new, more pro-labor administration under President Moon Jae-in. The labor movement is keeping the pressure up on the Moon administration to release Han and other labor activists, end to regressive labor laws, and hold Korea’s major corporations accountable.

Guy Ryder, director-general of the International Labor Organization, emphasized the importance of labor rights everywhere–not just in Korea–calling out the U.S. government for its failure to ratify conventions guaranteeing workers the freedom to join together in unions and negotiate with their employers.

From the United States, the United Kingdom, and the Philippines, to Brazil and Egypt, and everywhere workers are under attack, Korean workers have shown that collective action can create real, far-reaching change.

In recognizing the magnitude of the work of Han and the KCTU, Trumka wondered how many in the audience would be brave and committed enough to go to jail so that their brothers and sisters could have a chance for a better life. He also noted a point of hope. “The last time we gave the Meany-Kirkland award to someone who couldn’t come due to repression [Napoleon Gomez of Mexico’s Los Mineros], we won the fight. We are hopeful Han will soon be free as well.”