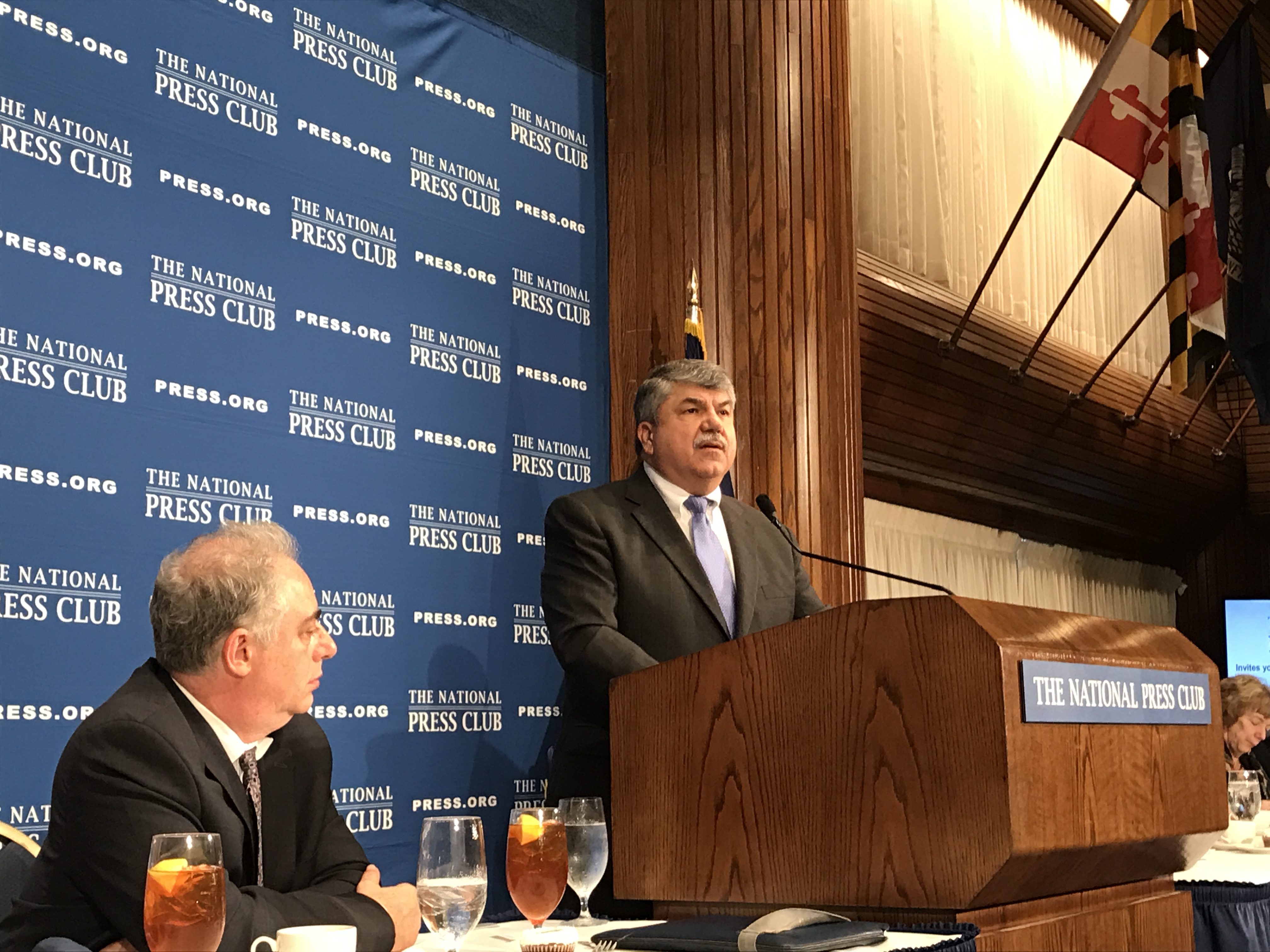 Today, AFL-CIO President Richard Trumka gave a major address before the National Press Club, calling upon leaders of both parties to not only pursue an agenda that benefits working people across the country, but that strengthens the right of every American to negotiate for better wages and benefits. He described the choice we face as a country:

Republicans, and too many Democrats, have rigged our economy to enrich a select few at the expense of everyday, hardworking Americans. It has been a direct assault on our deeply held national values of unity, justice and broad opportunity. It’s been done under the guise of creating jobs and justified by a fanatical economic theory that seeks to remove or destroy anything seen as a barrier to the free market, including unions.

We see it in our trade deals that create special rights for corporations. We see it in our health care system that is a windfall for insurance companies and a complicated, unaffordable mess for patients and families. We see it in our financial sector that has become the master, not the servant, of the real economy.

Above all…we see it in our outdated labor laws that allow employers to steal wages and unfairly restrict the freedom of workers to form unions.

But inequality is not inevitable. It is a choice. We can choose to do better.

Let me be perfectly clear—we will never solve the problem unless every worker has the power to bargain with our employer. Nothing else raises wages better or more fairly.

Now it would seem that the Bill of Rights—with its freedoms of speech and assembly—affords every worker the right to bargain with their employer. But that is not how the system works in practice.

The law today only requires employers to bargain with recognized unions, so we are proposing something bold. Something better. Every worker…everybody…deserves a job and the power to make it a good job…to bargain for higher wages, safe working conditions and retirement security. Whether you’re black or white. Gay or straight. Immigrant or native-born. Union or not yet union.

If you tend crops in North Carolina or clean hotel rooms in New York City, if you’re an engineer in Seattle or an autoworker in Mississippi, you should have the right to bargain with your co-workers for a better life. And employers must abide by that right.

Some might say this is radical. I say it is fundamental. And there has never been a more important time for workers to assert our collective power.

And he laid out the choice President Donald Trump must make:

We are closing in on the first 100 days of President Trump’s administration, and two very different factions have emerged. There is a Wall Street wing that undermines Donald Trump’s promises to workers…and a competing wing that could win the progress working people need.

President Trump needs to decide who he stands with. The coal miners, farmers, steelworkers and other regular Americans who he promised to help in the campaign…or the Wall Street tycoons who are rigging the economy at our expense. This decision will be the single greatest test of his presidency.