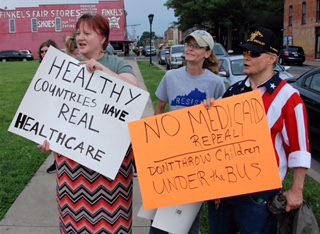 Senator Mitch McConnell sure does seem to be avoiding his constituents in the wake of his ongoing efforts to strip 22 million Americans (and over 230,000 Kentuckians) of health care in order to give yet another tax cut to the wealthiest 1%. But working people are joining together to fight back against this cynical ploy. Here are two stories of workers standing up to McConnell in Kentucky.

“The fact that Sen. McConnell chose to slip quietly into Paducah and Mayfield speaks volumes,” said a local Democratic activist who didn’t join the protest. “He obviously thinks Trumpcare is not popular.”

“So he chose to meet with his base voters, not hold a town hall for the general public.”

“Will protesting make any difference in what he thinks? I don’t know,” confessed 89-year-old Mary Jane Littleton of nearby Murray, the seat of Calloway County, which Trump won with 64.6%, a tad over 2% more than his statewide edge.

“But it’s like a lot of things,” mused Littleton, a veteran Democratic activist whose first choice for president in 1976 was liberal populist Oklahoma Sen. Fred Harris. “You don’t know ‘till you try. Some things work and some don’t, but you don’t stop trying.”

“He won’t hear us,” said Jennifer Morrison, a Murray State University professor. “He is in this nice air-conditioned building with these nicely-dressed people who showed up in these fancy cars.

“He is ignoring his constituents again.”

Senate Majority Leader Mitch McConnell probably figured he was on friendly turf Friday in Elizabethtown, the county seat, where he showed up for a local GOP fund-raiser.

“But some folks decided to let the senator know they aren’t happy with him or his healthcare plan,” Hardin countian Jim Pence posted on his feisty Hillbilly Report blog. “Deep Red Elizabethtown, Kentucky used to be a very welcoming place for Senator Mitch McConnell, but it ain’t now.”

Audrey Morrison, 68, came from Louisville to join her daughter, a Planned Parenthood intern.

“I hope that we persist,” she told Morgan Watkins of the Louisville Courier-Journal, because the GOP has yet to close the deal on repealing and replacing the ACA.

Nonetheless, she didn’t think the rally would change McConnell’s mind. “I think he’s been bought and sold. I don’t think anything’s going to make a difference to him,” Watkins quoted her.