Celebrating Workers on May Day: What Working People Are Doing This Week 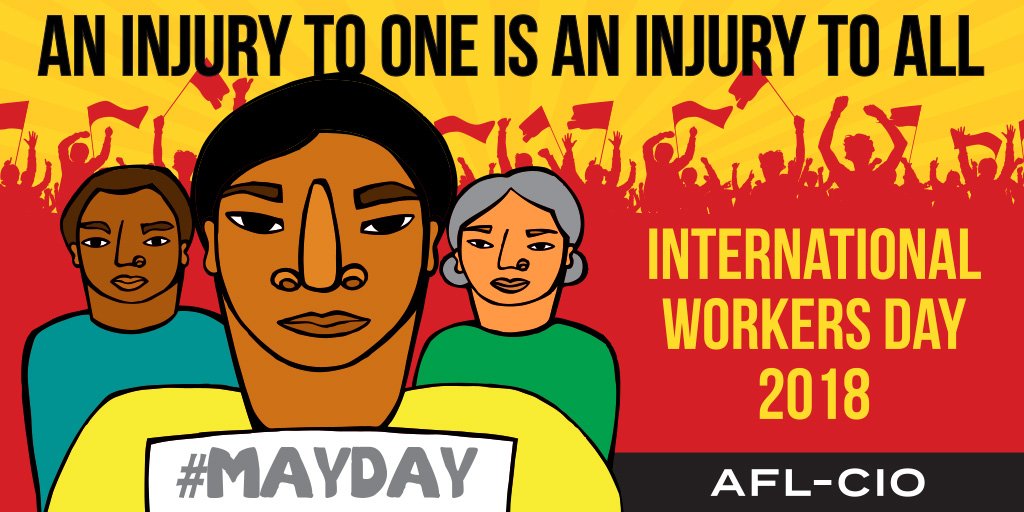 Celebrating Workers on May Day: What Working People Are Doing This Week

Welcome to our regular feature, a look at what the various AFL-CIO unions and other working family organizations are doing across the country and beyond. The labor movement is big and active—here’s a look at the broad range of activities we’re engaged in this week.

This is why Staying Woke…..AND fighting back is so important and relevant… https://t.co/kVTUFiMAVv

Today is a huge day for #Broadway performers, creatives and theatre enthusiasts alike. Congratulations to all of the talented Equity Members and our colleagues nominated for #TonyAwards2018 pic.twitter.com/TD5gtLYLeG

Today we’re celebrating workers and union members across the world who are fighting for better working conditions and workplace protections. #1u https://t.co/PiGY78QALh pic.twitter.com/2sZ8Qe5xde

Members of AFSCME Council 28 (Washington Federation of State Employees) and two other unions are fighting efforts by the University of Washington to outsource laundry services at the public institution’s medical school. https://t.co/fatIt2UCMx pic.twitter.com/lNv4zUGcIn

This is an atrocity, and while Chicago touts higher education rates and standardized test scores, Rahm is showing that he could care less about addressing infestation problems – @CTULocal1 VP @SharkeyCTU1 https://t.co/rjYcYwQE2o

Thank you @RepMimiWalters for meeting with ALPA pilots on the ways pilots and the aviation community can work together to #endhumantrafficking. pic.twitter.com/u7XFEH9Gxn

What does Big Pharma do when under public pressure because of skyrocketing prices? Give astronomical amounts of money to politicians and campaigns: https://t.co/ROovc15kE6 #RxForAll pic.twitter.com/aMiCmGvgQ0

Solidarity In Action! A coalition of 11 unions including musicians are standing together to demand Disney pay a living wage. #EndDisneyPoverty
https://t.co/GhGuQLFCRi

On #WorkersMemorialDay we honored Aloha 243 on the 30th remembrance. In the wake of Southwest 1380, we remember why we do our work and remind the public that we are Aviation’s First Responders. https://t.co/6MbNR2GPK8 pic.twitter.com/ZpAgo6sWQy

#Organizing is the heart and soul of the BCTGM! Just ask Nestle @Purina PetCare QA workers in Edmond, Okla. who are proud new L.366G members! Check out their story: https://t.co/4JKzvpYYYd #Union #1u pic.twitter.com/owkkTTNtT5

Love that this @NPR article is shedding light on skilled trades! (And timely since we open a state-of-the-art training center in Salt Lake City Monday…) #Boilermakers @joinIBB https://t.co/H9lHAuP9Zi

A healthy worker is a productive worker. Our Local 4 IN/KY just opened a health clinic in #Indianapolis to promote health and wellness of our members and their families. #1u #UnionStrong pic.twitter.com/h4Is9j1iF5

Happy #MayDay2018! We are proud to represent professional workers in union, like teachers, engineers, doctors, actors & entertainers. #InternationalWorkersDay #1u pic.twitter.com/B5yueXbn0R

Bread and Roses performance during #WorkersMemorialDay in #Raleigh. @NCDOL why weren’t you there? #1u pic.twitter.com/YHbvybyKsI

Are you looking for a career where you get paid to go to class? How about training where you don’t take out student loans, but receive excellent benefits & make livable wages? The Insulators Union wants to offer all of that to YOU!https://t.co/9XizCpwRkm https://t.co/gfNoNfPyKF

Today on #InternationalWorkersDay we celebrate the important role of labor communicators in furthering the fight for workers rights. For every strike and campaign there is a poster, slogan or image. This iconic work is called “Eight Hours” by Ricardo Levins Morales #MayDay #1u pic.twitter.com/TxAYMOG1Z5

What happens to people work in a country with low wages, no federal #paidleave law, and high health care costs? They can die. And that country is the United States of America. https://t.co/U2mRygWN5F

Join LCLAA in San Juan, Puerto Rico for the 22nd National Membership Convention as we strategize & work on the priorities of Latino & immigrant workers in the nation. Lets show solidarity & support for our siblings in PR. Register today through this link: https://t.co/ThjkUIavQn pic.twitter.com/Txi7jx35ik

Having a strong #union is one of the most effective ways to reduce #safety incidents #1USafety pic.twitter.com/9CLY9N9Ojw

Thank you @IBEWLocal1! This is personal for us. James Price is the father of IAM Government Employees Director @Jprice322. https://t.co/C9Ogt1eVgS

Saturday is Workers Memorial Day, a time for all of us to remember those who went to work but unfortunately never returned home because they lost their lives while on the job. https://t.co/sqDPT8uMM7

Mike McColgan and The Street Dogs have been outspoken advocates of Unions & workers’ rights. Last week at #NATCAphilly2018, #NATCA made Mike McColgan an honorary NATCA member & donated $2000 in the name of the Street Dogs to Massachusetts Fallen Heroes. https://t.co/0vyqMKV74T pic.twitter.com/2Y3TDjytvP

Happy #InternationalWorkersDay! We celebrate the women who are the backbone of our economy. Women like domestic workers who take care of our homes & families all while caring for their own. Today we honor them & all women whose power & dedication inspires us every day! #MayDay

It’s unacceptable that in the wealthiest country on the planet 40% of Americans skip necessary healthcare due to costs. Our patients and communities deserve expanded and improved #MedicareForAll!

For five years, Uber, Lyft and other Wall Street-financed App-based companies have been allowed to turn New York City into their unfettered playground, crushing drivers with a poverty so profound that four have taken their lives

“This is a dangerous time to be a journalist. At least 44 reporters were physically attacked in the U.S. last year and angry rhetoric that demonizes reporters persists. The threatening atmosphere is palpable.” https://t.co/ZVStg92por via @HuffPost

The importance of #mentalhealth in sports cannot be understated. We’ve partnered with the NFL & Cigna to create ‘Beyond the Physical: A Symposium on Mental Health in Sports’ in #ATL.

“Have you recently seen people collecting “right-to-work” signatures? DO NOT SIGN!!!”https://t.co/XnjzjnUJHp

First the Government ignored the needs of #PuertoRico since the hurricane, now they’re using the crisis to close nearly 300 more schools. Tell @RicardoRossello to stop the school closings. #PorNuestrasEscuelas https://t.co/sWWEVWsQRB

Solidarity with our brothers and sisters at AT&T https://t.co/8SXDFIDxYl

Next week is Public Service Recognition Week! @PASSNational urges its members & all #federalemployees to get involved & share your story! Check out resources @RPublicService #publicservice https://t.co/wlJRcl2Yww

On May 4 participate in WE Day Connect-an interactive, online event to celebrate selfless acts of volunteerism. Students will learn how their peers are working to make a difference in their local communities and around the world. Register here: https://t.co/dv9tXWgyq0

Extremely well-put, as always! Thank you for supporting this vital law. https://t.co/U6puMfvkbw

“We are committed to defend worker rights and workers’ interests and we shall struggle for more justice, equality and freedom. We shall combat all forms of abuse and oppresssion”–UGTT Secretary-General Noureddine Taboubi #MayDay 2018 in #Tunisiahttps://t.co/XnNak6yvlP

As part of NAOSH, OSHA organizes the Fall Safety Stand-Down (May 7-11) for fall prevention. Falls from elevation make up over a third of the deaths in construction workplaces, and all are preventable. Learn more here: https://t.co/u4KSUqTDYM

A worker’s safety shouldn’t depend on his or her location. It’s on all of us to raise health and safety standards around the world.
https://t.co/xaK2oKpM6X

What is labor doing for veterans?
Here is a great story from @IBEW Local 1 in St. Louis, MO. If your union is doing something to support your local veterans community we want to hear from you. https://t.co/LZTeQnnlNz

#MAYDAY2018 ACTION ALERT: @United airline catering workers are the company’s only frontline workers not unionized – but #UnitedDoesntCare. Join our ONLINE SOLIDARITY RALLY & post a message of support to show the workers that you stand by them. #beingunited https://t.co/dmI1476Guv pic.twitter.com/mdIhK0c3kR

People make a difference. UFCW EVP Stuart Appelbaum in the WSJ: “If brick-and-mortar retailers can’t compete on price in an online environment, the only thing that allows them to survive is to provide a positive in-store experience.” https://t.co/T1F5zrbiuB

Today & every day we honor the sacrifices that workers have made throughout history to secure hard-won rights. #MayDay pic.twitter.com/7jj9Yol3Mv

All working people deserve a voice on the job and the ability to speak up together. Uber and Lyft are no exception.https://t.co/Zz59x642aB pic.twitter.com/WnIwwRiwdM

Breaking: The editorial and video staff at The @Dodo have unionized with the WGAE and called on @BenjLerer & @GroupNineMedia to recognize the union without delay or division #1u #UnionYEShttps://t.co/9d1hE0hGE3 pic.twitter.com/Sr8tGNkOkn