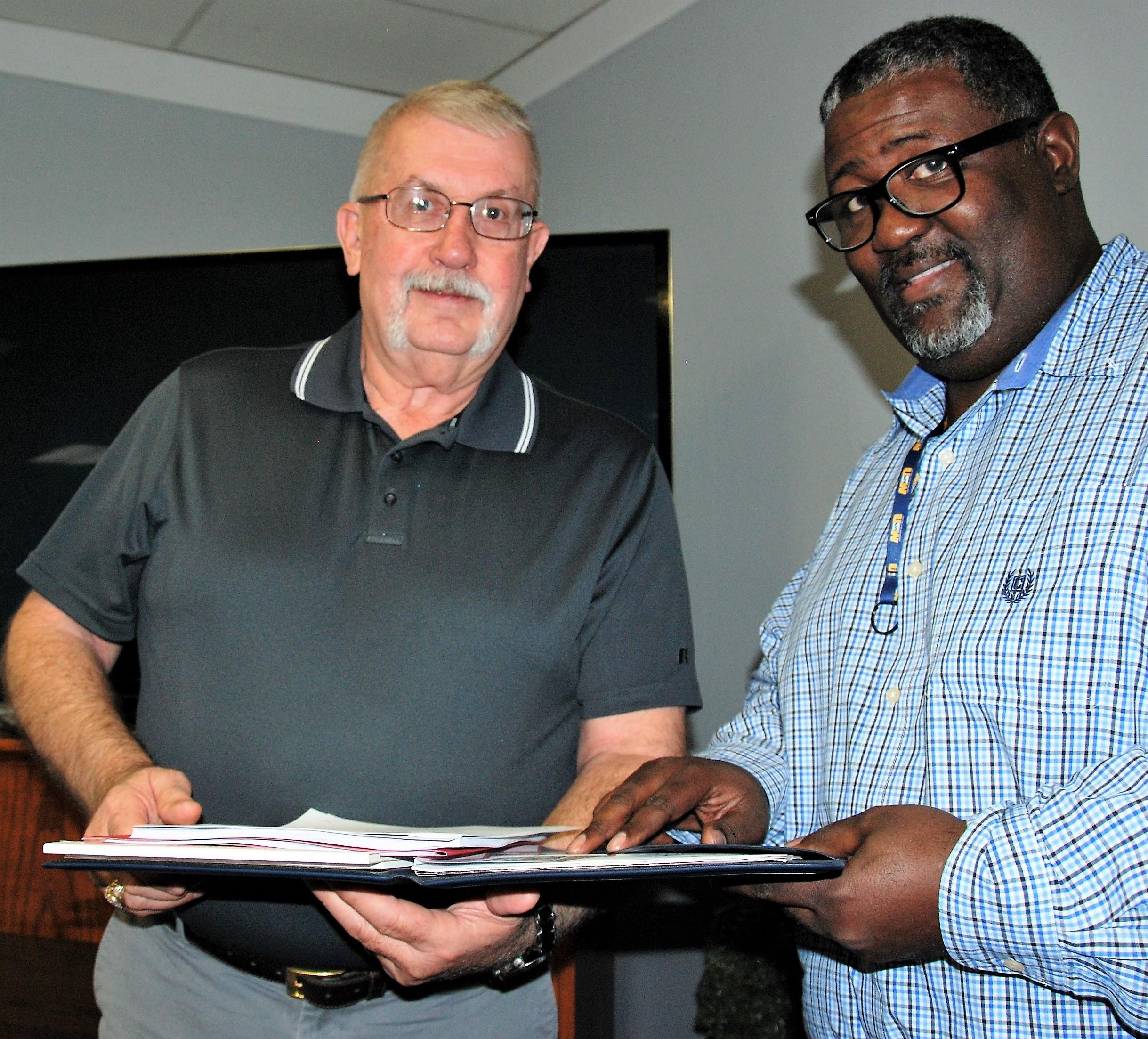 “It said, ‘China is a right-to-work state since 1949,’” explained the Henderson-based Tri-County Labor Council president, who just finished a second daylong labor history presentation at HCHS, one of the largest schools in western Kentucky.

“We were there last year and have been invited back next year,” said the 66-year-old retiree from Plumbers and Steamfitters Local 136, based in Evansville, Ind., across the Ohio River from Henderson.

“Everybody—the teachers, the students—has been very supportive. This is a great way to teach these millennials about unions, which have gotten beaten up pretty badly in Kentucky lately.”

The just-concluded session of the Republican-majority state Legislature passed a trio of union-busting bills—“right to work,” prevailing wage repeal and a paycheck deception measure.

“We wanted the students to know how these bills hurt everybody and not just union members,” Coomes said.

“We” included a trio of helpers: Marty Owens, Larry Parsons and Butch Puttman, all from Laborers Local 1392 in Owensboro, Ky., about 30 miles upriver from Henderson.

“We were in the auditorium all day,” said Coomes, who also sits on the Kentucky State AFL-CIO Executive Board.

The session was a reprise from the 2016 program, which stemmed from the bright red sticker showing an outline of China and the familiar hammer-and-sickle Communist symbol.

Coomes, who worked out of Local 136 for 47 years, happened to be handing out the stickers last year. When HCHS history and government teacher Ginger Stovall spied them, she had to have one.

Uncle John wasn’t sure whether to give her one. “Knowing that her family is Republican, I asked her what she was going to do with it. I said, ‘If you put it on your car, your family is going to be upset.’

“She said, ‘Oh, no. I’m going to put it on my bulletin board in class.’ She also said she spends a week teaching about unions.”

Then she popped the question to her kin: “Could you bring someone in to help me teach the history of unions?”

Uncle John was happy to oblige. He summoned Louisville, Ky., labor lawyer Dave Suetholz. “Dave was very gracious to do this for us last year. He taught five classes and probably saw over 500 kids.”

Coomes got the stickers from Tim Donoghue, president of the Erlanger, Ky.-based Northern Kentucky Central Labor Council. “We are using the bumper stickers to educate our new members as well as the public,” he explained.

“I get to teach labor history at Lloyd High School in Erlanger, and l have contacted several other schools. I like to stress to our council delegates and union leaders that we must get involved in school board elections and demand our story be told.”

This year, Coomes’ program grew into seven classes with about 700 students participating. It was held in conjunction with career day.

He said representatives of unions, mostly building trades, constituted about “a third of everybody who was there. I felt really good about that.”

He said Parsons did most of the history teaching. “After he finished, I’d talk about my career and plug the building trades at career day,” Coomes said.

Meanwhile, he and Madisonville, Ky., resident Kevin Walton of United Steelworkers Local 9443 in Robards, Ky., are working on a labor history CD. Walton, the central labor council vice president and COPE director and a state AFL-CIO board member, helped with the 2016 program. But this year he was away at the USW’s convention in Las Vegas.

“We really want the CD to have a wow factor with slides and photos,” Coomes said. “We want it professionally done. It’s a great way to show high school students how bad unions have been mistreated and what unions do for all working people, not just union members.”

This is a guest post from Berry Craig, a retired member of AFT Local 1360. It originally appeared at Kentucky State AFL-CIO.