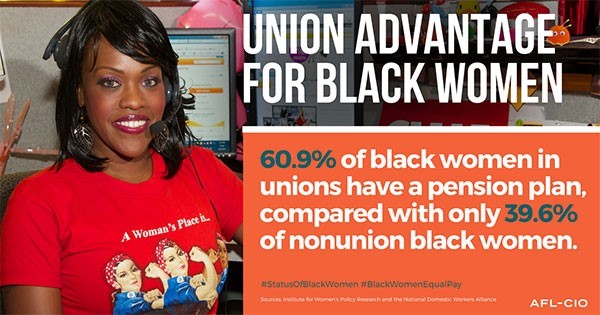 Today, we commiserate Black Women’s Equal Pay Day. The gap between the earnings of black women and white men is so large that, essentially, up to today black women have been working for free. Think of it as the modern-day equivalent of the constitutional count of slaves as three-fifths of a person.

Undoubtedly, those fighting to preserve the status quo will say black women need only to get off welfare, work harder and gain more skills to achieve equal pay. This, of course, ignores the fact that a higher share of black women are employed than any other racial group.

Black women also are significantly more likely to pursue postsecondary education than their counterparts in other racial groups. The problem for black women is neither work ethic nor educational achievement. Instead, systemic barriers are preventing too many black women from turning their education into earnings, including a refusal of many companies to promote black women into management.

Another part of the problem is that black workers are far more likely to live in states that enact laws that undermine our freedom to come together and negotiate on the job. These laws originally were designed to divide black and white workers in the Jim Crow South. Today, they threaten solidarity and starve unions of precious resources.

This hurts black women directly, holding down their wages and limiting access to important benefits like employer-provided health care and pensions. This is confirmed in a report from the Institute for Women’s Policy Research, by Asha DuMonthier, Chandra Childers and Jessica Milli, which looks at the employment and earnings, work and family, and poverty and opportunity of black women, among other things.

So fighting discrimination in promotions and guaranteeing the freedom of every worker to negotiate a fair return on their labor is the best way to finally eliminate Black Women’s Equal Pay Day.

Raising the minimum wage is another key element. The report by IWPR is in coalition with the National Domestic Workers Alliance. Black women are disproportionately affected by the lower wages that characterize care work. And black workers are more likely to live in states where the minimum wage is still at the federal floor of only $7.25 an hour. This makes the fight for $15 an hour a union essential to achieving equal pay for black women.

The motion picture “Hidden Figures” helps remind us that black women, in the face of the numbing segregation of opportunity, were optimistic, educated and skilled enough to write the computer code that literally launched America into the space age. And, before they wrote the computer code, they were smart enough to do the arithmetic behind the math to find the answers ahead of the computers.

Karl Zielinski: Mary, a person with an engineer’s mind should be an engineer. You can’t be a computer the rest of your life.

Zielinski: And I’m a Polish Jew whose parents died in a Nazi prison camp. Now I’m standing beneath a spaceship that’s going to carry an astronaut to the stars. I think we can say we are living the impossible. Let me ask you, if you were a white male, would you wish to be an engineer?

Jackson: I wouldn’t have to. I’d already be one.