‘All I Could Think About Was My Friend Was Gone’ 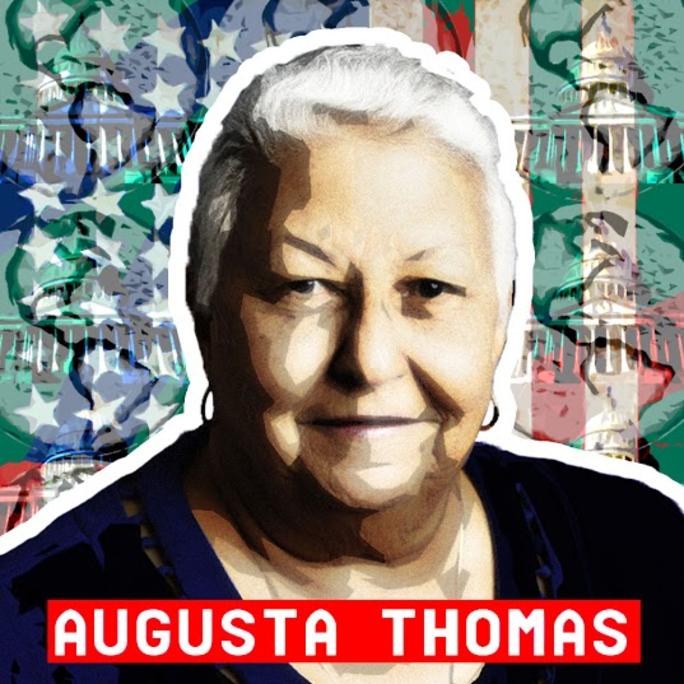 ‘All I Could Think About Was My Friend Was Gone’

Augusta Thomas and two of her teenage friends had their hearts set on a game of Chinese checkers. But “Little Martin” balked.

They needed four to play, explained the Louisville-born Thomas. At age 85, she’s still on the job as vice president for women and fair practices with the AFGE in Washington, D.C.

“We had to take turns putting the coal and the wood in the furnace in the cellar and it was ‘Little Martin’s’ time to do it,” she said, grinning and eyes twinkling. “So when he went down, I locked the door.”

The impasse lasted half an hour before “Little Martin” relented and agreed to play. “But let me tell you what,” Thomas said, her grin broadening. “I got punished when I got home.”

Thomas shared her story in a speech at Saturday’s Working People’s Day of Action rally in Louisville, where she was born and has lived most of her life. Though her job is in Washington, she keeps an apartment in her hometown, which is Kentucky’s largest city.

When Thomas was 13, she went to Atlanta to live with her aunt and uncle, Minnie and the Rev. William Rowe. He was a Methodist minister and colleague of the Rev. Martin Luther King Sr., a Baptist pastor.

“The pastors would meet at Little Martin’s house,” Thomas expanded on the story after her speech. “It had a parlor—we called it a living room. That’s where the ministers would go. ‘Little Martin’ would always sit by the door listening to what they were saying.”

Thomas, one of the country’s oldest union officers, was a civil rights activist before she was a labor activist.

In 1960, she journeyed to Greensboro, North Carolina, to join the historic lunch counter sit-ins. Angry whites spit on her and knocked her off a stool. Police arrested her twice.

Meanwhile, “Little Martin” had grown up, followed his father into the ministry and was helping lead the growing civil rights movement.

Thomas joined AFGE on Nov. 12, 1966, her first day on the job at the Veterans Administration hospital in Louisville. She and King crossed paths again in Memphis in April of 1968.

He was in the city to support 1,300 African American sanitation workers who went on strike after two members of a garbage truck crew, Echol Cole and Robert Walker, were killed on the job. Seeking shelter from a rainstorm, they climbed into the back of their truck and were crushed to death when the trash compactor malfunctioned.

For decades, black sanitation department employees like Cole and Walker had worked long hours at low pay in dangerous conditions. All the while, they endured virulent racial prejudice in Jim Crow Memphis.

Thomas blamed the deaths of Cole and Walker on “the racism and negativism of the city officials who treated them less than human, who ignored the workers’ call for safety and who paid them poverty wages.” The workers also wanted a union.

As a result, “Thirteen hundred of our brothers and sisters rose up, risked everything and went to strike for dignity and justice, using four simple words—powerful words—’I am a man.'”

Ultimately, the city gave in, improved salaries and safety standards and recognized the union, AFSCME Local 1733.

King did not live to see the union victory. He was assassinated on April 4.

Thomas and five other women from different Falls City unions had gone to Memphis to stand in solidarity with the strikers. They checked into first floor rooms at the Lorraine Motel. King was staying on the second floor.

The women were in their rooms when James Earl Ray, a racist white man, killed King with a rifle shot. King was standing on a second-floor balcony.

Thomas and her union sisters heard the gunfire. “We thought it was firecrackers, and we just ignored it,” Thomas said.

They turned on the TV and saw news reports of the slaying. “The manager couldn’t keep us,” Thomas said. “We had to go back to the Lorraine. But we could only go so far, and all I could think about was my friend was gone.”

The night before, Thomas and the women who came with her from Louisville joined the crowd at Bishop Mason Temple church where King spoke.

His last address, went down in history as the “I’ve Been to the Mountaintop” speech.

“When he was making that speech, I had chills running down me,” Thomas said after the rally. “But I didn’t get to talk to him.”

In her remarks, Thomas quoted from the ringing conclusion of King’s famous speech: “I may not get there with you. But I want you to know tonight, that we, as a people, will get to the Promised Land. And so I’m happy tonight; I’m not worried about anything; I’m not fearing any man. Mine eyes have seen the glory of the coming of the Lord.”

Thomas admonished the crowd: “We’ve got to get to the mountaintop. We have got to work together. We’ve got to get rid of ’45’ and some of those folks up on that hill in Washington, D.C.”

She added, “They’re running scared. We won Alabama. We won Virginia….They are afraid they are going to lose November 2018, and we’re going to make sure they do.”

Continued Thomas: “The future of working people hangs in the balance right now. As a woman, I have seen all we have worked for inside and outside the workplace. Women are more equal on the unionized shop floor. As brothers and sisters, we bargain together to get a fair day’s pay for a fair day’s work.

“By joining together in unions, women, particularly women of color, have gotten closer to true equality in the workplace. Equal pay, family-friendly leave and scheduling, and freedom from harassment. We must stand until we are all equals no matter our race, no matter our gender, no matter our class. We must stand together and demand an end to this rigged system so that we all may be truly free.”

This post originally appeared at the Kentucky State AFL-CIO.