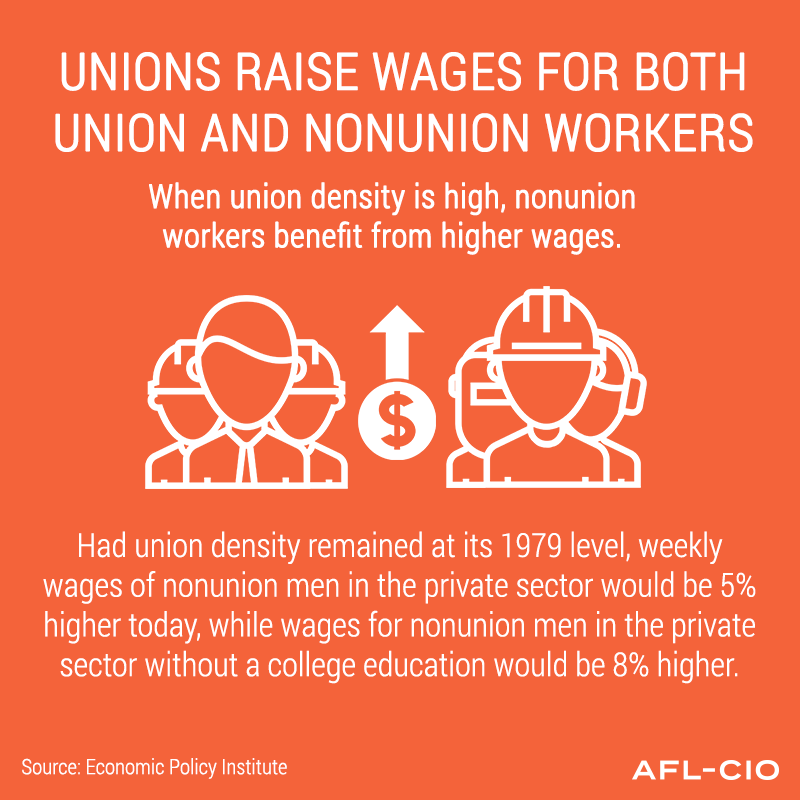 A new report from the Economic Policy Institute takes a deep look at the role and importance of unions as the key avenue for working people to come together and negotiate for an expansion of their rights and freedoms. Here are nine things you need to know about the state of the labor movement in 2017.

1. Unions amplify the voices of working people on the job: Organized labor is one of the largest institutions in America: One in nine U.S. workers—16 million of us—are represented by unions. Joining a union means that you and your co-workers have a say in the workplace. When working people come together to negotiate, it means they are more likely to have their voice heard, which means they are more likely to win wage increases, better access to health care and workplace safety, more reasonable and predictable work schedules, and more satisfactory avenues for settling workplace disputes.

4. Unions are thriving in diverse industries: More and more working people are joining unions in fields that are experiencing a lot of change. Some key groups of working people that are growing in their union membership rates include: television writers, graduate student workers, professional and technical employees, UPS employees, Maine lobster fishers, cafeteria and contract workers, and working people at digital companies.

5. Democracy is strengthened when more working people are union members: Business owners and CEOs organize to represent their interests before government and in society. Unions enable working people to do the same thing with fewer resources. Unions fight not only for their own members, but for laws that benefit all working people, from things as diverse as Social Security and child labor laws to voting rights and the minimum wage.

7. More specifically, unions help reduce wage gaps and increase wages for women and people of color: Through a variety of methods, unions make it easier for women and people of color to obtain equal pay for equal work. Things like establishing pay transparency, correcting salary discrepancies, making raise and promotion processes clearer, and helping pursue justice for workers who have been discriminated against are major tools in the pursuit of worker equality.

8. Union workplaces are safer and all workplaces are safer because of unions: One of the key reasons that working people organize into unions is to improve workplace safety. In a country where annually nearly 60,000 people die on the job or because of workplace-related diseases, and 7 million others are injured or get sick on the job, worker safety is a major concern. Unions have a long history of fighting for safer workplaces. When a workplace is unionized, working people are better able to negotiate for even safer workplaces.

9. Corporate lobbyists and their lawmaker friends are dismantling the rights of working people: From dishonest, but well-funded, anti-union campaigns to pushing for anti-worker federal and state laws, the richest corporations, their lobbyists, and the lawmakers that ally with them are fighting hard to take away your rights as a worker. For example, between 2011 and 2015, 15 states enacted laws that severely limited or dismantled collective bargaining rights for public-sector unions. Many states have cut public-sector wages and benefits. States and localities are frequently abandoning the promises they made to retired workers and abandoning pension obligations. These and a variety of other tactics are widespread and growing. The best way to fight back against these trends is through stronger unions.

As the report concludes:

Unions are a dynamic and ever-evolving institution of the American economy that exist to give working people a voice and leverage over their working conditions and the economic policy decisions that shape these conditions. Collective bargaining is indispensable if we want to achieve shared prosperity.

But it is precisely because they are effective and necessary for shared prosperity that unions are under attack by employers who want to maintain excessive leverage over workers and by policymakers representing the interests of the top 1 percent. These attacks have succeeded in increasing the gap between the number of workers who would like to be represented by a union and the number who are represented by a union. And these threats to the freedom to join together in unions haven’t been met with a policy response sufficient to keep the playing field level between organizing workers and the employers looking to thwart them.

Giving workers a real voice and leverage is essential for democracy.